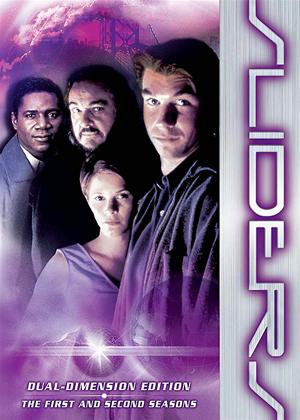 Forget the lastest batch of US sci-drivel, this is a show that doesn't solve all of it's problems with a Matrix-inspired fist-fight or an explosion-of-the-week. The Sliders are actually capable of thinking through their problems, which is a handy skill to have when faced with the challenge of a new world.

Sliders bridges the gap between those time-travel shows with a regular cast (like Quantum Leap, The Time Tunnel, Doctor Who, Seven Days, etc) and more speculative science fiction anthology shows like The Outer Limits and The Twilight Zone. However, that's not to say that the concept of Sliders is unoriginal - quite the opposite.

It attempts to answer all of those 'what if' questions that arise from the exciting theory of travelling to multiple dimensions (crossing the Einstein-Rosen Bridge). It plunders popular culture along the way, with episodes blatantly based on various movies, icons and books (for example, 'The Good the Bad and the Wealthy' and 'Greatfellas' which really speak for themselves) but again, somehow, Sliders injects it's own originality into the mix to create a truly thought-provoking, addictive and original series with characters that work excellently together (solid performances from a great cast as well).

Without referring to popular culture the show simply wouldn't work as well as it does - afterall, part of the magic is wondering what the world might be like, for instance, if Elvis was still alive, or if the allies had lost the second world war, etc. As Quinn Mallory puts it:

"What if you could find brand new worlds, right here on Earth, where anything is possible? Same planet, different dimension."

Only one odd thing is the episode selection screens, as they don't tell you in which order to watch them (assuming you don't use the 'play all' option). This means that, for me (selecting episodes from left to right) the Sliders arrived on a new world dressed in hippy-style clothes, but didn't actually get those clothes until the next episode.

All in all a fantastic show.