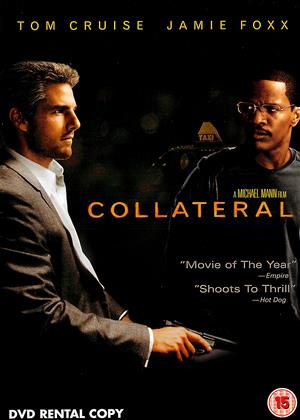 They say being a taxi driver can be a tough job, the unsociable hours, rude passengers and oh yeah, the chance that you could pick up a hitman with a deadline too meet...

But surely you can drive him too his target and then get the heck out of there....but not if you are as busy a bunny as Cruise's character in this movie. You see he has five targets to get too and to make matters worse, thanks to some cunning manipulation, he manages to make the driver himself suspect numero uno!

The movie is fairly slow paced to start and gets moving but never at a pace that makes you think whoa slow down, or indeed make you wish that you could catch your breath. There is also the slightly suspend your disbelief section as we realise that the lawyer that our hero picks up as a fare at the beginning, is one of the hitman's contracts.

The movie ends in the office building where she works and you watch as the two of them fight to stay alive. But this is the only time there is any real suspense and the high excitement comes from a mass gun battle in a crowded nightclub.

It offers much, but doesn't quite deliver the goods.

Basically more suspense and some more genuinely white knuckle moments may have raised this movie higher up my rankings but hey, like with Riddick, I've seen better, I've seen worse. Just don't expect too much and you may not be disappointed.

What was all the fuss about??? - Collateral review by CP Customer

I was really looking forward to seeing this film, although Tom Cruise is generally not an actor I enjoy watching, the reviews and Jamie Foxx's recent Oscar made me curious. I really wish I hadn't bothered. Cruise cruised through the film acting one emotion; emotionless (which you'll recognise from Minority Report), and Foxx, though much more interesting to watch, was unable to do enough to lift the film beyond the realms of a slightly higher-than-usual budget cheesy action movie. I admit, I'm not a fan of the tough-guy action film, but having watched this I'm amazed at the fuss it has generated.

A taut and at times terrifying thriller featuring Jamie Foxx and Tom Cruise. Foxx is a taxi driver who has spent the last 12 years dream of setting up the ultimate Limo business. He becomes an unwitting pawn in a contract that Tom Cruise (playing a hard nosed man ) has been hired to carry out. Really don't want to give too much away but this is a gripping film which will have you, like it did me, on the edge of your seat.

Beware of the man in the grey suit. - Collateral review by CP Customer

Wow, from start to finish the film won`t let you look away, Tense, scary and very good. Poor Max with his fare from hell, while vincent is cool, calm & calculated. Enjoy.

....... it may have been me but why do American actors mumble so much, so much so that you couldn't always tell what they were saying even when you rewound the film and listened again!

And why is the music so loud and talking so quiet. Turn the volume up, turn the volume down etc. Perhaps I'm just getting old ;-)

Very quiet and slow but watchable (only once)!!

Silver-haired and silver-suited Vincent's visibly focussed, driven, sharp and articulate. Yet look more closely and you might notice something slightly different about him. Spitting out words laced with venom and acting in a fashion that only a man in total control can, he's not the average businessman that you might have initially mistaken him for.

Director Michael Mann allows us quality time with his characters in what is an intentionally unhurried and sensual opening sequence. And they're characters that writer Stuart Beattie has successfully painted in full colour.

Mann's pacing, of what is a 120-minute film, is superb. Never getting bogged down in unnecessary back-story the sense of tension, which is well maintained throughout, constantly builds with the growing momentum. It's also to the veteran director's credit that he doesn't allow any sense of Hollywood-movie-contrivance to creep in.

The cinematography is awesome too. The City of Angels, shrouded in night brought to life by vibrant neon-technicolour, looks fantastic. James Newton Howard's score is also particularly effective.

Tom Cruise and Jamie Foxx both produce bravura performances. Cruise as comfortable with darkly comic scenes as with the nuances of a remorseless killer. Foxx, meanwhile, expertly emphasising Max's personal and emotional arc.

Michael Mann's films continue to be a real draw. Just like a good jazz player he improvises, plays unexpected off-notes and keeps his audience guessing.

Collateral is one of his finest.

I must confess that Tom Cruise isn't one of my favourite actors. The roles he chooses are often too goody-goody, too good looking, too straight - yet here he plays a baddy, so that's a change for the better. He's also quite a 'wooden' actor - he always seems to play Tom Cruise [Aside: Even in the v. poor 'Valkyrie', he played Tom Cruise playing a too-good Nazi - but perhaps he picked himself for the lead role in that film because he owns the film studio...]

Michael Mann is a director whose work I like - one of his films, 'Manhunter', is a favourite of mine - and he always seems to get the best out of the actors, even getting some of the more 'wooden' ones to act, for example Russell Crowe in 'The Insider'.

And here, although Tom Cruise is still somewhat on the wooden side, the director not only gets him to act a little, but gets him to give an effective performance as a deadpan, sociopathic contract killer. I like it - seems to fit Mr Cruise quite well :)

Max (Jamie Foxx) is a cab driver. Max is a self-deluding dreamer, drifting along, with big plans but lacking the motivation to put them into action. At the start of the film an attractive woman lawyer gets into Max's cab and after some banter gives Max her card. So it's obvious that she's going to reappear at the end. The Max picks up smoothy but baddy Vincent (Tom Cruise) who hires the unsuspecting Max for the evening to drive him around while he makes five hits, one of whom (of course) just happens to be the attractive lawyer. In the process Vincent manages to motivate Max just enough so that the goodies win and the baddy (of course) perishes.

It's all a bit predictable, but the film is stylish and well directed - and I did quite like the idea of Mr Cruise being a baddy. I enjoyed it and it's above average so I'll give it 4/5 stars, but that does seem a bit on the high side...

[Aside: Look out for a brief cameo appearance by Jason Statham as the airport bagman at the very beginning]