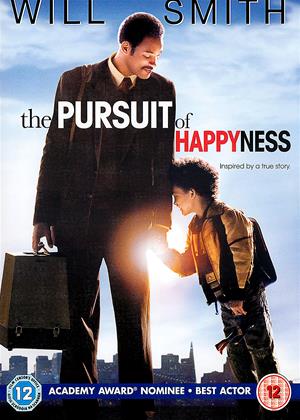 Synopsis:
Will Smith stars in this moving tale inspired by a true story of Chris Gardner, a San Francisco salesman who's struggling to make ends meet. When his girlfriend Linda (Thandie Newton) walks out, Chris is left to raise their 5-year old son Christopher (Jaden Smith) on his own. Chris' determination finally pays off when he lands an unpaid internship in a brutally competitive stockbroker-training program, where only twenty interns will make the cut. But without a salary, Chris and his son are evicted from their apartment and are forced to sleep on the streets, in homeless shelters and even behind the locked doors of a metro station bathroom.
With self confidence and the love and trust of his son, Chris Gardner rises above his obstacles to become a Wall Street legend.
Actors:
Will Smith, Thandie Newton, Jaden Smith, Brian Howe, James Karen, Dan Castellaneta, Kurt Fuller, Takayo Fischer, Kevin West, George Cheung, David Michael Silverman, Domenic Bove, Geoff Callan, Joyful Raven, Scott Klace, Rashida Clendening, Eric Schniewind, Peter Fitzsimmons, Maurice Sherbanee, Zuhair Haddad
Directors:
Gabriele Muccino
Producers:
Todd Black, Jason Blumenthal, James Lassiter, Will Smith, Steve Tisch
Writers:
Steve Conrad
Studio:
Sony
Genres:
Drama

Reviews (9) of The Pursuit of Happyness

Outline: Will Smith tries to achieve the goal of getting a high paying job while at the same time providing for his son and hitting rock bottom financially.

This was a feel-good movie. Very inspirational for anyone who is going through tough times. Will Smith does his thing throughout the flick. His acting is top notch and his son Jaden Smith, who plays his son in the movie as well does a good job. You really feel for Will Smith's character as he is trying to take care of his kid. The whole thing seems genuine. When he starts to hit rock bottom while trying to get this "dream job" you really connect with him and go through his sorrows. It was a little long, but that doesn't detract from the overall experience. This is one of those wholesome family flicks you can watch with anyone. Give it a shot..you won't regret it.

My unhappyness - The Pursuit of Happyness review by CP Customer

I like Will Smith, I like Thandie Newton and I liked the idea, especially set against a true story. However, to wait so long for any "happyness" to appear and for it to be so understated was a bit of a let down. Most of the good things were left to be announced as post-film on-screen messages, rather than acted out scenes...no mention was made of his girlfriend or her future role either...a bit disappointing.

The trailer is the film. - The Pursuit of Happyness review by CP Customer

Loosely based on the 'rags to riches' life story of stockbroker Chris Gardner, 'The Pursuit Of Happyness' is a fairly standard example of the underachieving little guy with big ambitions who goes through a series of adversities to finally realise his goals. The biggest problem with 'The Pursuit Of Happyness' is that it's a film which consists of an decent opening 10 minutes, a tear jerking 5 minute ending and a long and drawn out 90 minutes peppered with a few dramatic moments. And while the story of Chris Gardner is admirable and inspirational to a point, it doesn't translate into a good film. Will Smith does a respectable job of portraying Gardner as a very real and fallible human being, a good man who never comes across as completely likeable either. But the ultimate irony of 'The Pursuit Of Happyness' is that the trailer for the film is more of less the whole movie minus the boring bits. Do yourself a favour, click on the 'Watch Preview' link and save yourself a wasted rental.

Hollywood, but lovely - The Pursuit of Happyness review by CP Customer

Will Smith and the little boy act brilliantly. Shame the hardship had to be overkilled, but the whole 'based on a true story' effect worked its magic on me.

Surprisingly uplifting - The Pursuit of Happyness review by CP Customer

These days, when lots of people are concerned about losing their jobs and money getting tighter, I found this movie both moving and inspirational. Heartwarming stuff - give it a try.

Moving Film - The Pursuit of Happyness review by CP Customer

This is an ace film, very moving, you follow it with hope, I found I was able to relate to the main character and desparetly wanted the ending to work out right. A must see film, very compelling.

This is for those of us who are having a hard time of it at the moment and need abit of hope for the future, a sign to say things will improve. It will make you cry!

In the pursuit of wealth! - The Pursuit of Happyness review by CS

I would rename this film 'The pursuit of Money', because it is less about finding true happiness and more about achieving wealth. The (sic) play on 'happiness' says it all really! This is an all American story about pursuing wealth and if Americans feel that money buys happiness, then I guess that sums it all up for them! The film itself is quite good, but I feel that it sends out a very poor message about family, happiness and life. Will spends the entire film trying to make money and for me that's not what happiness is about at all, but perhaps in the USA it is! A very all American movie that perhaps has less meaning and resonance in Europe than Hollywood would like to think!!

Will goes family - The Pursuit of Happyness review by NC

Multi million superstar does the thing with the son, so double-bubble. All very touching etc. but maybe lacking a bit of cred as the limo takes them back to one of many homes and hotels etc...........

Brilliant - The Pursuit of Happyness review by CP Customer

Gritty drama which tracks the life of Will Smith's character, Chris, when he is struggling with poverty, a difficult relationship and parenthood in the early 1980's. His courage and optimism give you a sense of hope, in spite of adversity. Smith's performance is superb, and his son looks comfortable in front of the camera too.