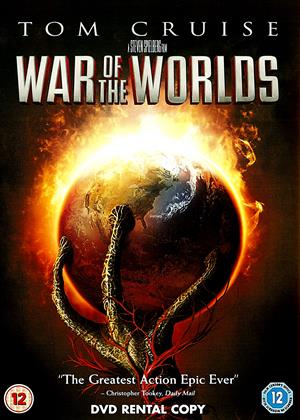 Reviews (7) of War of the Worlds

A stinker - War of the Worlds review by CP Customer

I heard it was bad but I was prepared to give it a chance. After all, directed by Spielberg, starring Cruise it can't be that bad. I approached it with an open mind but it was truely awful and very irritating to watch. I didn't want to stop half way through so I persevered but couldn't wait for it to end. I would encourage you to avoid.

this film should be avoided. We are only putting money into movie moguls to provide trash with a few good special effects chucked in.

The chances of anything coming from Mars..... - War of the Worlds review by CP Customer

Hmmm what can I say about Spielbergs treatment of H.G.Well's classic novel?

The transplanting of the story to the present day, was I suppose inevitable but why move it to America for the location? And why change the character from a journalist to a man who works on the docks?

Now don't get me wrong, I liked this film and it looked stunning when it came to the visual effects, but parts didn't quite gell for me.

Which is a shame as the last 2 Tom Cruise films I saw were more than just okay. And again he proves that he can act but..heck I just don't know, something was missing from this movie.

I'm glad that Spielberg didn't make it a gung ho, save the world from the alien threat with a gun toting, muscle bound hero but....I dunno perhaps the soap opera elements between his family could have been down played and a little more action?

And the ending seemed rather rushed too me. I've seen better from Spielberg but I've seen worse.

and not what in the end, is an updated remake of the 60's original. Okay but lacking in parts.

Better Than Reported SciFi - War of the Worlds review by GI

Despite its many flaws this science fiction film, adapted with a high degree of accuracy from the famous novel by H.G. Wells, is actually very entertaining and does have some of director Steven Spielberg's innovative flashes of genius. The main problem is actually in the writing. Moving the setting from Edwardian England to modern day USA is a clever move and works well but the narrative never seems to make up its mind what it wants to focus on so there is a mix and match of themes and story lines going on that don't always work well. Wells is probably responsible for the idea in fiction that any visiting aliens will be malevolent and alien invasion stories are nothing new in cinema and TV, indeed this story has been adapted for both before. Spielberg sets the action through the eyes of one dysfunctional family trying to survive and principally the experience of Rachel (Dakota Fanning), the young daughter of Ray (Tom Cruise). Unfortunately the narrative doesn't stick to this and the film veers about somewhat. But there are some great scenes too not least the first reveal of the alien 'tripods' (based very much on the original novels description), the sinking of the Hudson River ferry and also the multiple bodies seen floating down the river and a speeding train totally afire hurtling through a town. These are all impressive. On the downbeat is a rather weird relationship crisis between Cruise' unconventional father and his teenage son (Justin Chatwin) which reaches a peak at the most ridiculous time and it's a story arc that detracts from the film's essential motives. In short, a massive lightening storm heralds the arrival of alien invaders who, in giant machines, hunt, kill and feed on humans. Ray and his two children, who he is looking after for a weekend hit the road to try and escape with a plan to get to the children's mother, from whom Ray is divorced. Like similar films the main drama comes from the actions of other survivors rather than the aliens but this film has an interesting take on the book and where some scenes appear implausible they are actually lifted from the novel. Perhaps trying to be too respectful to the novel has flawed the film a little too much. I get the impression that budget restraint may have restricted some of the set pieces being fully realised and as a result they lack the suspense necessary to work well. But if you like a well made science fiction film this remains very watchable.

I enjoyed this movie, although it was nothing like the book. It was exciting and scary with family conflict and alien terror. Good visuial effects. The cellar scene was quite harrowing.

Still don’t like tom cruise but good film. - War of the Worlds review by CP Customer

I gave this film a shot as I really wasn’t interested in going to see it at the cinema. When it started I thought I would be bored but it is actually good considering tom cruise is in it.

war of the worlds - War of the Worlds review by Lou