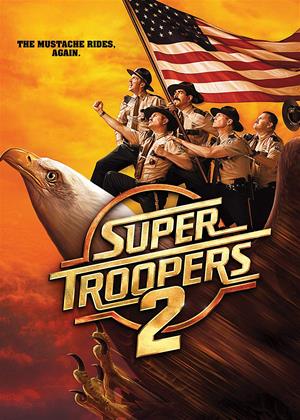 I doubt that there will ever be a more memorable Broken Lizard film than Super Troopers. How could they possibly top the pull-over pranks of reiterating “meow” every sentence or Farva’s classic outbursts over liters of cola and spit in burgers? Since their other comedies of Club Dread and Beerfest failed to live up to such cult status, the troupe has returned once more to the well that made them notable men of mustaches. And while it doesn’t look like they have a more original or timely premise to their long-awaited return, there’s at least enough jokes to warrant a satisfying sequel, crossing the finish line by a whisker.

The boys are all brought back together for a plot fit for a cartoon. America has come into taking over a small pocket of Canadian territory and needs some American highway patrolmen to usher out the current mounties in the region. Now, why would the fraternity-style collective be selected for such a volatile situation that pits Canadians against Americans? Therein lies the more-than-expected twist of them being set up to take a fall. Of course, it’s really just an excuse to throw the Broken Lizard characters into a new setting where they can crack plenty of Canadian jokes about kilometers, liters, pancakes, and a female hormone drug playfully named Flova Scotia.

Much like the previous film, Super Troopers 2 doesn’t present anything all that unique in its story, borrowing the same format as its predecessor, in addition to nostalgic callbacks aplenty. Through their slapstick shenanigans, they stumble onto a Canadian drug scheme. It shouldn’t come as a surprise that the dastardly small-town Canadian mayor, played by Rob Lowe with a hammed-up accent, is behind this operation, what with his stirring of the pot for national tensions. It’s not even all that surprising when the new female love interest of the picture happens to be involved in not one, but two twists.

Despite a hefty wealth of callback gags, most of the humor hits rather than misses. Most of the hits come from Jay Chandrasekhar as the thickest mustache-touting officer and Brian Cox as the oldest and grumpiest leader of the frat house patrolmen. Where the comedy takes its hard rights lowbrow is when Kevin Heffernan plows through as Officer Farva. He’s the rowdiest of the lot, the type of obnoxious pal you try to avoid but always seems to show up at parties. Most of his jokes are so textbook juvenile it becomes difficult at times to know if we’re meant to laugh at the inept persistence of his ego or genuinely smirk at his gum-chewing jokes. He’s only bearable to watch in the sense that we know his idiocy won’t be rewarded, to the point that Farva will commit self-mutilation in the name of his own fun.

I was surprised by how much of the dialogue made me laugh. There’s a scene where Heffernan is swallowing M&Ms whole and Brian Cox questions why his officer would do such a thing. There’s isn’t much of a punchline, but the combination of Cox’s expression and Heffernan’s cocky consumption of candy just rubbed me the right way. I also dug the back-and-forth with the mounties, delivering slams about Americans when around the officers and playing pranks on each other in private about not knowing who Danny Devito is. All of this helps amplify the comedy so that the expected and disheartening shootout climax doesn’t sting as much with unoriginality.

While there are no scenes that will remain as classic as the original and the abundance of gag retreads hamper a portion of the comedy, I must admit that Super Troopers 2 felt more even than its predecessor. There may not be as much present here to top mustache rides, liters of cola, or bulletproof jockstraps, but the addition of cocky Canadian mounties, arguments over the metric system, and a scene of Rob Lowe tugging on a prostitute’s penis made my smile grow. There’s just enough hysterics to pull the film over for an inspection.