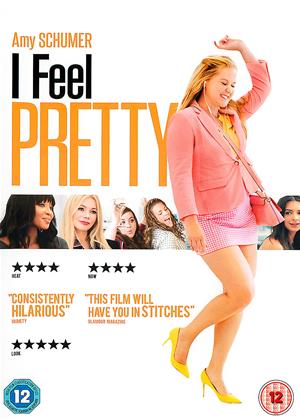 Reviews (5) of I Feel Pretty

watchable but flawed - I Feel Pretty review by SR

A flimsy film but it highlights the current staggering pressures to look perfect, something which is leading to serious mental health issues. Hollywood still fails to reflect real life, as my bewildered husband pointed out: "but she IS pretty" …

I hated this movie - but then I am not its target audience AKA teenage girls.

I must admit I lost interest and forgot this tedious movie as soon as it ended.

Unlike nuttier ever-moaning feminists I see nothing wrong in the concept and I'm sure the same themes could be used to create a much better, funnier, wittier movie in future.

But this is dire. 1 star and that's being generous!

After Trainwreck I though Amy Schumer was going to add something different and edgy to film comedy but after Snatched and this I don't think so. It's generic, pointless and says nothing about body image of any note.

Nearly. Could have worked - I Feel Pretty review by NC

Is watchable/entertaining, but could have been far more edgy. Was a bit like Jack Black in drag. Too much flimsy US toilet humour, and not quite the edge it could of had. Devil wears Prada had style, this has splash and noise.

it is what it is - I Feel Pretty review by sw

this is your normal rom com,

theres no point over thinking why it was made ,morals or deep meanings.

sure it has some odd bits, but if your looking for an easy to watch funny rom com then im sure youl like this.

id say its simular to big, shallow hal, 50 first dates and those type of films.

I Feel Pretty comes branded as an empowering film for women to not be ashamed of their bodies but presented with all the stumbling of an after-school special or made-for-TV movie. The giant rant about how women should feel great comes slamming into the climax with such expected and fantastical force that I half-expected Amy Schumer to start her speech with “I learned something today” and end with “the more you know.” It’s not a bad message but it comes bundled with all the cringe of a high school play about self-esteem.

Schumer plays Renee, a fat girl tired of being fat. She wants a better job, a better body, and to find a man. And so she goes to the gym and works hard on the bikes until she falls off and conks her head. When she awakens, she makes a miraculous discovery; she’s thin and pretty, at least by her standards. How did this happen? Movie logic would dictate the initial perception being that her wish she made one night finally came true. In reality, she just seems to have mental damage that has forced her to imagine herself looking beautiful enough to have confidence in pursuing a job at a prestigious makeup agency and ask out a cute guy at the store.

This premise could technically work except the film makes one fatal flaw; we never see that idealized thin and pretty version of Renee. In a way, this does present an intriguing portrait of the character where we see everything through the eyes of others that still see her as the same old self with a boost in confidence. At the same time, though, we’re robbed of any sort of surprise that can finally be revealed when she finally witnesses the photos after she stops seeing herself as the ideal woman. Perhaps the film would have been more effective if we followed all the characters except Renee, struggling with deciding whether or not to tell her that she really isn’t that sleek girl she thinks she is. There’s a far more interesting angle there than merely watching Schumer play herself up as overly confident.

But that’s rewriting this story and I tried to take this concept at face value. Schumer is at least believable enough in showcasing that sense of insecurity at the gym, uncomfortableness with her not-so-pretty friends, and unhinged gushing at finally finding herself to be all that and a bag of low-fat chips. Her chemistry opposite Rory Scovel is pretty strong even if he has to fulfill a certain level of flabbergastation at Renee’s fearless nature. He’s mostly fulfilling the required role of hoisting up Schumer’s esteem, just as much as the stuffy CEO of a makeup company played by Lauren Hutton who is so desperate to connect with regular folks she 110% buys into Renee’s down-to-earth approach to makeup that is apparently a mystery to literally every single woman in her company.

I Feel Pretty is a fantasy that gets far too fantastical to fully appreciate its believe-in-yourself message, muddied up by a ho-hum romantic comedy aspect and altered perspectives. There’s no doubt that for teenage girls there’s an appeal as a self-esteem booster but the stumbling narrative and on-the-nose moral message makes this a more guilty-pleasure comfort food than an energizing jolt of inspiration.