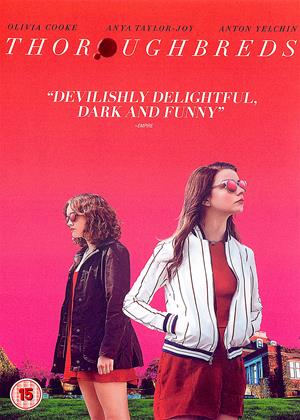 This is a better film than the previous reviews on here might suggest. If anything, its problem is that it is too good at achieving its own ends. It depicts a world of cruelty and emotional blankness, and depicts it so well that it becomes like a dry case study.

It is sustained by excellent performances from the two young female leads, and by the humour introduced by Anton Yelchin (who died in a freak accident just after this film was completed).

Right from the opening scene with the horse I hated this pointless mindless film, turned it off halfway through.

Have to say I quite enjoyed the film. Nothing we haven't seen before and it felt very stylistic of a few other films. But on saying that it did have some nice engaging performances from the leads. It didn't drag for me and at less than an hour and a half seemed well paced. Well worth a canter but without reaching a gallop. Worth the watch.

Goodness me , WHY has this movie got such a High Star Rating ? It is Tediously Dull.

Nothing much happens and when it finally does it is all off screen an over in moments .

What a Pointless Exercise in Tedium Management.

I watched it to the end hoping it would turn Darkly Funny at any moment but it didn't turn into anything, it just went on and on and did nothing .

Not a great film this, not many characters or alternative scenes, it is a film that could have been much better, it's too full of its own importance and self satisfaction, it needed to try more.

Basically amounts to 2 girls from posh backgrounds wanting to do bad stuff to one of the parents - takes ages to get going and I couldn't get excited even by the end.

There have been some comparisons with the excellent Heathers, which I would have preferred to watch again instead of this now I've seen it!

Liked but wanted to Love - Thoroughbreds review by Olly

The film does have some faults but overall I enjoyed it.

Firstly, the acting is fantastic. Olivia Cooke is terrific. I've not seen her anything before, but going on this performance she is certainly one to watch in the future. Anya Taylor-Joy, as always, was superb and Anton Yelchin was brilliant in, what sadly turned out to be, one of his final roles.

The film has some pacing issues. Most of the time the slow progress of the film works to it's advantage and creates a chilling affect which kept me tense and gripped. However, this sometimes worked to it's detriment and I found myself bored on occasions.

I also found the mum and the step-dad characters to be quite weak, and wished they were more fleshed out so they'd be more engaging.

Having said that, I liked the film. Not quite as much as I wanted to, but still enough to recommend and something I'm likely to re-watch in the future.

I want to be clear that I love independent films, but this was so incredibly boring. I didn’t like the way it was filmed, more like a home movie feeling. I felt I’d wasted an hour and a half of my life. Having said I like independent films, American ones seem very similar these days, not much of a storyline, always about dysfunctional youths and just a bit boring. This film was unwatchable though. Shame as the lead actress is a good actress, I enjoyed her in Vanity Fair on TV.

Switched it off halfway through. Not shocked or surprised by people's evil tendancies anymore. Same old same old.

In trying to describe Thoroughbreds, I keep coming back to Ghost World. Here is a tale of two women who reconnect after graduating and discover their lives are a mixture of boredom and frustration. It seems that living within a rich suburban community would create a certain sense of bitterness for the bored to make something drastic a necessity in turning life around from the dreary. And for the scenario of these two, murder seems to be the cure.

Death begins early when the Amanda (Olivia Cooke) kills her crippled horse and is charged with animal cruelty. She returns home to be tutored by her childhood friend Lily (Anya Taylor-Joy) whom she had grown apart from after the death of Lily’s dad. Lily now resides with a step-father she despises. Amanda is just crazy enough to believe that killing the step-dad is a great idea, especially when she initially believed that Lily had been paid to converse and bond with her via mother’s orders.

The motive for murder comes from disillusionment and weariness of the world. The initial proposal for death comes after their step-dad berates the two of them for their ways, disapproving of sleepovers and how they lay about the house. What a buzzkill, they figure. And so we have a Hitchcock situation where the two women conspire with how to commit the perfect crime because, hey, beats watching TV all day.

While the premise is Hitchcockian, the style is somewhat muddled in a format that seems to teeter between David Lynch style subtlety and an overtly dry drama broken into chapters. There’s some humor present but it becomes buried layers of cynism and pleasing production design, where they very construction of dialogue and scenes are more intriguing than the story and characters occupying. I never really felt much of the milieu of Amanda’s obsession with killing nor Lily’s desire for change, to the point where she willingly drugs herself.

A wild card for a portion of the film comes when Anton Yelchin pops up as a troublemaking drug dealer they discover at a party. He’d make a great killer to absolve Amanda and Lily of any correlation. He’d also make a great element of shaking things up in how he doesn’t fully trust the two women and the mistakes he could make along the way. My only desire would be that Yelchin occupied more of the picture as his continual bungling of the murder scheme added to the tension, whereas the third act becomes a bit too quiet with the contemplative nature of how messy murder can be.

Thoroughbreds has a certain odd appeal that never quite reaches a unique level of the wasteland of white or the insanity of culling but still looks good trying to reach that height. But there’s such an unflinching sensation of being dead in the water for a film all about a murder gone awry. The absurdity never feels all that absurd, maintaining a certain surreal dignity that I wished would break its chain by the time it goes the extra mile of the horrific by the end in its cruel conclusion. While it’s an entertaining watch, don’t expect it to be as the same breed akin to American Psycho meets Ghost World, aspirations I foolishly attached when proceeding into this picture.