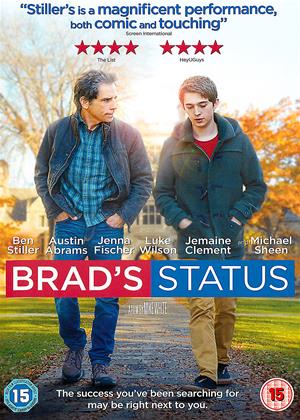 Stiller is not a sympathetic character all the way through. Not sure how much is acting......or this could just be him. Very long dialogue on how much of an arse he has become, or always was......that is only question raised in the film.............

dull and monotonous- well acted but gets nowhere fast.

Makes you wonder why they bother making suhc films?

I couldn't sympathise with any of the characters and found the whole thing a wee bit tedious. I couldn't honestly recommend this film

I liked it! - Brad's Status review by JB

I don't review on here much but felt I needed to as, as of the time of writing, all the other reviews on here were negative. I liked the movie!

Yes, the central character is a self involved and relatively privileged person who could be seen as unlikable. But what the other reviewers here saw as an insufferable mess, I see as someone who is unhappy and unconsciously seeking redemption. The film is clearly portraying him as someone who has his ugly side and has no self awareness. Screenwriter and director Mike White has fun with this, with some very uncomfortable fantasy sequences... And, sequences in the 'reality' of the film, such as Ben Stiller staring at his half naked son. It's more Alan partridge than Woody Allen. Mike White has form with his... His 2000 debut Chuck and Buck features some of the most uncomfortable scenes I've ever seen in a movie.

It's the journey Ben Stiller goes on that makes this film interesting... Getting over his status as a so-called beta male, masochistically enthralled with his more so-called successful friends. It's ironic in some way, as it's his son who is going to university, and about to embark on a big life journey... Not Ben! But Ben needs it more.

It's not as satisfying as some of White's other stuff... I love, love his TV series Enlightened with indie goddess Laura Dern . It unfortunately does underwrite its major female character, the wife of the Ben Stiller character played by Jenna Fischer. And its ending does feel rather pat and unchallenging. But it has much more subtlety, intelligence and uncomfortable fun than a film about a man going through a midlife crisis should have.

Possibly one of his worst films. No humour and a story without development ashe increasingly becomes envious of his wealthy friends. Completely depressing!

Boring and Unispiring Film - Brad's Status review by AS

Stiller's character is more in need of a therapist to listen to his ramblings than a cinema audience. Avoid this film ...

Enjoyable film for the 50 somethings - Brad's Status review by CD

Good acting and characterisation - I really liked the film. The sort of situations every parent might go through when universities are being considered, told with humour and sensitivity

'Some guys have empires, what do I have' - Brad's Status review by JR

This is familiar middle class mid-life crisis territory. One character sums it up when she tells Brad his endless navel-gazing, jealousy and whinging are "white male privilege first class problems". Stiller's frozen, expressionless face is matched by the dull, pedestrian language in Michael White's screenplay: "My mind drifted back to college. Back then I was in love with the world and the world was in love with me. When did we fall out of love with each other? Where did it all go wrong?" There is a lot of that. On the plus side there is a short cameo featuring Jemaine Clement which is funny (unlike the rest of the film), and the musical score by Mark Mothersbaug is outstanding.