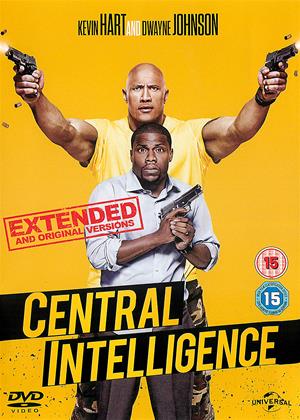 Not quite a pair - Central Intelligence review by NC

Loads of buddy-cop-spy things been done. Murphy, Lawrence, De Niro etc. This one is OK but not quite one of the best. Dwayne looks even bigger than a steroids carton, but acting is prob not even up to Arnie to be fair. Lots of fun and frolics though. Harmless fun, but not ground breaker.

Not that much intelligence is central to the plot. - Central Intelligence review by DS

Don’t go into this film thinking you are going to see a silly but exciting spy drama. Quite frankly the plotline and story presented with Central Intelligence are neither central to the film’s purpose or in any shape intelligent. Clearly, this film was made as another vehicle to showcase Dwayne Johnson amiable hunk film persona along with Kevin Hart’s uptight and intense version. To this extent the film works with the schtick being Johnson is the loveable and over-enthusiastic nerd, although still massive, imposing and impossible to defeat in any situation and Hart, normally more wild and bug-eyed, playing a straight up 9 to 5 white collar bore. It works but it really isn’t so different or unusual that I sat up from slump on the sofa as the film played out.

Both actors have a good chemistry with each other and with Amy Ryan and it is this dynamic that saves the film from being just another m’eh in a long, long, line of mismatched partners comedy films.

The film does try to make a point about cruelty and bullying but in huge broad strokes that only an utter idiot or the world’s biggest bully might not get and we get to this point by having the most poorly written and pointless cameo as Jason Bateman pops up as the father of all bullies with his cartoonish and shoe-horned in character. It was at his appearance that the film started to lose me.

The action side of the film with shooting and even death involved is almost a side issue it is so silly and slight. I’m sure they didn’t make this film to be this way though.

I understood that early on the spy, CIA side, of the film should not be taken too seriously and mismatched friends are where the viewers should be focussing but this overworked trope was going to have to be completely captivating and different to keep me glued to the screen. Johnson and Hart just about worked enough magic and fun to stop me sighing continuously but it was close.

Everyone in the film keeps things moving on, there is some funny laugh out loud moments, not enough but they are there, but the longer the film goes on the more it sags under its own weight and by the end it is dragging along.

It’s a shame because Johnson’s on-screen presence is certainly enough to keep most viewers enthralled because in all honesty it’s a big as him and his 100 Megawatt smile. It works, he knows it works, and film-makers do. Kevin Hart with his considerable smaller frame and more intense energy, can also work in the right film, playing off against the personality of Johnson it works but in this viewers opinion it needs a better script and film.

Enough for a wet Sunday afternoon or a boring middle of the weeknight but film-makers have to got to stop churning out these films unless they do something different, something that’ll make anyone over twenty-years-old sit up and take notice.

Close but no cigar – even for the artist formerly known as ‘The Rock’.