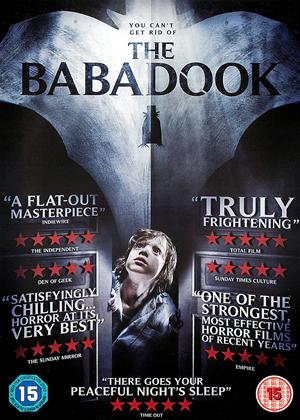 Reviews (4) of The Babadook

This low-budget horror movie is unusual in a number of ways from the get-go; it's Australian, which means it's outside the Hollywood mainstream, and the director is female, which is unusual anywhere, especially in the horror genre. Which Jennifer Kent (previously unknown, but destined, judging by this film, to be somewhat better known in years to come) clearly knows and loves. "Cabin In The Woods" was hailed as a triumphantly original horror film because it took all the desperately tired horror clichés and semi-humorously justified them in a parody that liked itself just a little bit too much, and was ultimately cosily self-referential underneath all the gore and CGI. This film is completely off-the-wall. The references are there (some of them in the form of actual movie clips watched by the characters on TV), but they're eclectic to say the least; "Nosferatu" is a major influence, and I'm pretty sure "The Haunting" (the original, not the abominable remake), "The Exorcist", "The Omen", and pretty much anything else involving a haunted house and/or an evil child are in there somewhere. As are early and rather creepy Disney cartoons about the big bad wolf. And I'm pleased to see that Ms. Halt is well aware of Mario Bava.

The two central characters, the surprisingly unglamorous Essie Davis (remember, this isn't Hollywood), and the quite extraordinary Noah Wiseman, who I hope escapes the curse of child actors and has a long and fruitful career ahead of him, are superb as a mother and son who both have major problems of an absolutely believable kind. Apart from Mister Babadook, of course... Who is the most original monster we've seen in a very, very long time. Not that we see much of him - a clever director (and we definitely have one here) knows that hiding your monster as much as possible makes him scarier. But Ms Kent really shows how smart she is by understanding that, even in the era of CGI, not only is less more when it comes to being scary, but if you clearly establish your monster as a stylized creature that might have sprung from an exceptionally ill-advised children's storybook, the kind of CGI you can afford for a low-budget film will work perfectly if you know what you're doing. Which, fortunately, she does.

As horror films go, this one has extraordinarily little gore. What it has is proper edge-of-seat scariness. This film scared me, and not once did it do so with the kind of cheap jump-cut that automatically gives us a fright in the same way that we'll jump if somebody says "Boo!" And it's startlingly original. Your perception of exactly who or what the monster is changes repeatedly throughout the film, largely due to the performances of the two leading actors, and I defy anybody to say "I knew it!" when they find out how it all ends. No spoilers - it suffices to say that it's not how you expected. Especially if you're going by the rules of formulaic Hollywood slasher movies. And don't bother flipping those rules on their heads either - this movie is too original to attempt the "exactly the opposite of what you expected" gambit and hope you'll applaud such a daring conception. Very original indeed, with characters you actually believe in and care about. And it certainly creeped the hell out of me! What more can you possibly want from a horror film? If you're a gorehound, forget it. Otherwise, highly recommended.

This had received favourable reviews on its cinema release so I decided to give it a go. The premise is simple, child finds story book the story talks of the babadook. Once the book is read he will never go away. The movie sets up the scares well with a long and cautious build up. It felt very creepy. I am sure in the cinema the scares would have been more in your face. I felt the scares to be rather tame. I was waiting for the big one which never really came.

The lead actors are ace and deserve a mention here but the movie really fell on its nose in the final 3rd. A good watch and entertaining enough but certainly not a horror classic. 6.5/10

Interesting and spooky horror - The Babadook review by WH

Works through quite familiar tropes, but has a fun and interesting way of presenting its scares and twists. Leads are excellent and the growing sense of dread is palpable throughout. Well-crafted and directed. Enjoyable and worth a look.

I ad no idea what to expect with this film but was pleasantly surprised. It is a superb little horror movie, especially the first two acts, and genuinely scary - because it uses suggestion. Compare to unscary horrors which OD on CGI and reveals.

The suggestion is from pictures in a book - not CGI monsters. Lots of shadows and creaking doors opening. Great! And the horror is transferred to viewers via the characters and their reactions.

This film is a lesson in how to make an effective horror movie on a low budget. CGI fanatics, please watch. Though many teens these days seem to want in-you-face CGI monsters all through a horror film - pure gore-fests. Not scary at all.

Similar to some possession movies like The Exorcist or others, I suppose. And a book coming to life is an old idea, in the early 20th century short stories of MR James like the 'Mezzotint'. The image coming to life has been used more recently with TV and online monsters, as in The Ring.

It would be 5 stars but the third act and ending (NO SPOILERS) was not satisfying for me - though I know films have to end somewhere. I just didn't buy it, however.

In an age when horror movies seem far too blatant and tired, The Babadook injects some much needed life into the genre. Rather than go straight for the boogieman that haunts a family, the story chooses to build up the mother/son relationship with all the tensions and frustrations of maintaining a single family unit. It creates real drama and heartbreak that the evil, shadowy figure doesn’t even have to show up for this to be an engaging story. But when he finally rears his dark visage, that’s when The Babadook really gets under your skin and gave me the biggest chills I have felt in a long time.

Amelia’s life is a mess as she struggles to raise her six-year-old son Sam all by herself. Her husband was killed in a car crash on her way to the hospital to give birth. Days go by without sleep as she consoles the young Sam from his nightmare of the darkness. Her days are stuffed as she works as a nursing home assistant during the day. Sam’s wild imagination grates on her nerves the way he speaks of monsters and assembles weapons to defend his mother from the bad guys. She doesn’t have time for this kind of childish nonsense that gets him kicked out of school and birthday parties. It’s an endless stream of overworking and frustrated screams for this mother.

Enter Mister Babadook, a strange red book that comes off Sam’s shelf with no barcode or publisher markings. The black-and-white pop-up book tells the spooky tale of the figure known as Mister Babadook, appearing as a properly dressed Nosferatu with massive eyes and lengthy claws. The story reveals that the ghastly entity makes itself known with a knock (Ba! Ba! Doook!) before he enters your soul and takes control. The frightening illustrations leave Sam an emotional mess of fear and his mother with another sleepless night. Amelia naturally destroys the book for being such a pain for the bedtime routine. But, per the book’s warning, it returns at her doorstep repaired and with new passages. The book makes the threat that it will take Amelia’s soul so that she can kill the dog, her son and finally herself.

But the Babadook’s methods are not your standard ghost affair where mommy suddenly turns into the killer just like that. Mister Babadook creeps into her psyche slowly, letting all the misery and pain of a single mother tear away at her spirit. She starts screaming and hollering at the boy in a way the worst parent could ever do. Her visions of the Babadook grow increasingly spookier, appearing in her vision as she dozes off in front of the television. But the plucky Sam does not give up on his mom doing all he can to force the beast out.

Director Jennifer Kent has a keen eye for visual direction in scenes with or without paranormal activity. When Amelia finally gets a moment to rest, it feels as though her falling into bed is from 10 feet up. The nights without sleep seamlessly transition from dusk to dawn as seen from under the bedsheets. Days go by like blurs as Amelia finds hardly a single second to herself. You can just feel the pulsating vein in her head from the endless barrage of Sam’s angry screams. All of this keeps the movie tense enough, but the haunting of Mister Babadook is what pushes the already robust story of family drama into horror at full force. Mister Babadook himself never fully appears, concealed mostly in shadows of darkness with his creepy voice echoing inside the house. It’s a terrifying sight especially when Amelia and Sam must face him without fear and learning to let go.

The Babadook is so shockingly scary in how it draws from raw parental fear that actually sells the whole love-can-defeat-evil solution in a believable tone. Whereas other horror films use the family as mere puppets for the spookiness of jump scares, this is a film that gives us a real family with real problems. Those problems manifest into the darkness of the paranormal with a monster that preys on every parent’s worst vision of themselves. No true parent ever wants to hurt their child and allowing other forces to bring out that bad side is such a terrifying idea. We want to see Amelia pull through and beat such a demon because she is better than him. This is a true horror film in every sense that creates real scares rather than artificial ones of slammed doors and flashy gore. I can’t think of any film in the past few years that ever gave me such chills that I am so grateful to feel from such a dark yet enduring bit of horror.