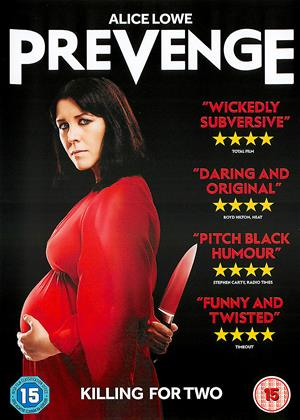 When I read the blurb about this movie, my heart sank - it seemed like a usual Brit flick state-subsidised bore-fest or maybe a manhating mob free-for-all.

But no, it's genuinely funny, esp if you like dark humour as I do.

Sure, it feels more like a TV sitcom at times, along the lines of NIGHTY NIGHT by Julia Davies.

And the baby voice takes some getting used to - though is it all in the mad murderess's head?

It loses some momentum as it goes on, but the early scenes are highly entertaining. It did fizzle out, rather, at the end - but I enjoyed most of it anyway, which is more than I can say for most British films funded by the BFI and lottery.

One criticism: it was a tad confusing at times, esp re 2 bearded men who look similar, and still not quite sure re that BUT plenty of Hollywood movies are confusing too.

Sketch drawn out into a film - Prevenge review by TE

As a big fan of Alice Lowe's work in darkly comic films and leftfield tv series, I have to say that I found 'Prevenge' a tad disappointing.

It feels like a black comedy sketch over-stretched to film length. This leads to a meandering second half of the film, which is enlivened only by a good Halloween sequence.

Lowe is a really good comic actor, especially in her facial expressions and laconic timing, but here she replaces much of that with gory violence, most of which is hammed up with perverse twists.

I hope that Alice Lowe is working on something more worthy of her talents.

This is never going to be a blockbuster but it is amusing. There are some big holes in the plot and it is quite unbelievable at times, but all the characters are well-played.

Prevenge has a simple, but effective premise: a pregnant woman named Ruth (Alice Lowe) is guided by her unborn baby towards heinous crimes that involve murdering people in cold blood. Yes it sounds cheesy and campy, but for some reason it just works. But, what’s even more interesting is the sole making of this film. Alice Lowe used her pregnancy as an inspiration to write, produce, cast, and film this low-budget flick before her real-world baby was introduced to the world. And this baby would have the best story to tell when it grows up (talking about having a creative mother!). In fact, her portrayal of a pregnant character is equal times captivating as is excruciating to watch, and I mean that in the good-est possible way.

The film features silly but believable murders with hilariously awesome set ups (talking about suspense). And all of this happens while the hand of justice nears closer to these bloody affairs, serving as an opposing force to Ruth’s unwarranted behavior. Or is it?

Prevenge ticks all the boxes of a British black humour piece, using its low budget to its advantage and creatively altering clichés that would otherwise hamper the experience in moving forward. What I mean to say by this is Prevenge features excellent cinematography, creatively lit set pieces, unusual score, and a fancy dream sequence that makes the whole difference in the world in regards to filming segments that are out-of-this-world.

Granted, to enjoy Prevenge is to throw all preconceptions of how a movie should look like right out of the window. If your sense of humour gets easily offended by sarcastic remarks, bizarre innuendos, and misogynistic characters such as Tom Davis’ DJ Dan (whose character meets a perfectly palpable poetic justice) – then Prevenge would probably not be your cup of tea. If however, you’re excited by reading all of the above and then some, good news: Prevenge is your cup of tea I guess?

For all intents and purposes, if you want to see something original that defies all movie genres and tries to build a genre on its own – see Prevenge. Go ahead, nobody’s judging you.