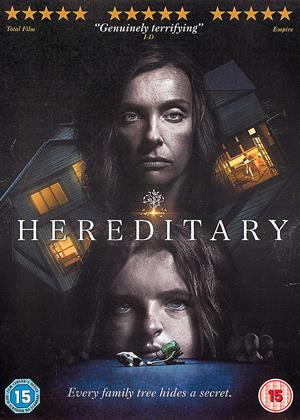 This is a joke - right? - Hereditary review by AL

I haven't laughed so much in ages. Whas this supposed to be a send up of a horror film? The facial expressions are classic and the dialogue hilarious. All it needs is the canned laughter. I won't be sleeping with the lights on tonight :(

No amount of cliche plot devices and incessant spooky music can mask what is a turgid run of the mill horror.

Obvious and done better elsewhere.overhyped as 90% of films are today.Rest in peace Nic roeg.

I first tried watching this when tired - but had to give up as it's so slow and has details in it that you'll only see if you concentrate.

I watched it again when I was fresher and really enjoyed it - if that's the right word. It has genuinely spooky moments, all about ghosts and spirits and seances.

However, the final half hour of the movie - the third act - badly lets it down. The story becomes laughable then really, which is a shame, considering the time taken to build up the tension and suspense. Maybe the slowness means it is NOT a movie for teenagers with the attention span of a puppy to watch though...

Maybe those of a religious bent will find it scary - I know people like that who were terrified of the Exorcist because they actually believe in God and demons and hell. Well I don't and I found that movie laughable too.

BUT it's not TOO bad. I liked some scenes and the soundtrack too.

But I must admit I did burst out laughing at the end...

what a boring film.all the hype about this film is unfounded. 2 hours of boredom. I was really looking forward to this film after seeing the trailers.the trailers are the film the rest zzzzzzzzzzzz

I was looking forward to this film from the trailer, but it just got worse and worse, there are good Horrors and films like this one which aren't. Life is short and afterwards I realised I had wasted 2 hours of it watching this ridiculous film.

Hereditary ,hmm soo many thngs are ... - Hereditary review by porky

SPOILERS ; Enjoyable Horror and more a rehash of Roman Polanski's Classic 'Rosmary's Baby' than anything original.

The Manipulated Family ,the Secret Sect ,Black magic/Devil worship and the Rebirth of one of the Demons of Hell in Human Form.

Dressed up as something very New and Modern in its approach to Horror it is actually nothing more than an old Dennis Wheatley novel made in a modern setting.

Entertaining enough but nothing new to see here.

Of course you could, if you wanted to, lump much of ‘Hereditary’ in with the many other ‘is there something supernatural afoot, or is it all in the mind’ horror films that exist. But such is the slow-burning set-up, the very convincing performances and the assuredly weird direction (from Ari Aster, who also wrote this), that the resultant filmic experience is so much more.

My favourite performance, in some impressive company, is that of young Alex Wolff as Peter, son of Steve and Annie Graham (Gabriel Byrne and Toni Collette) and brother to poor Charlie (Milly Shapiro). Whilst Peter and his mother seem most susceptible to the demonic mischief going on, whilst Steve remains scared but sceptical, it is Peter who evokes most sympathy, even though he has a terrible guilty secret.

Throughout this 127 minute experience, I made several attempts to pause the DVD to fix a drink. Such was the power of the film, it remained unfixed. Whilst his doesn’t perhaps measure up to all the hype and positivity heaped upon it (it has been set alongside ‘The Exorcist’ and ‘The Omen’), it is nevertheless, an extraordinarily powerful and retrained horror story. Restrained because, for all the fevered emotion and tragically disintegrating personalities on display, there is relatively little gore or special effects. What there is, however, is exactly right.

Al of these things push the finale into dizzying heights of surreal hellishness. If you have any interest in horror, and especially if you may find yourself disillusioned by much current popular horror output, this two hours will make you horrifically happy.

Not up to the hype - Hereditary review by JD

As the first half hour dragged through i thought id check out IMDB.

A quick read of a couple it just sounds like peer pressure. Someone said the slowness made it a great horror so everyone jumped on board.

Fact is this is just like any half decent horror, only spread out far slower and longer than it needs to be. The first 90minutes has you wondering if this is just some family drama and you mis read the horror bit on the synopsis.

It doesnt really explain whats happening either. And no, this isnt so you use your imagination - its just lazy writing and directing.

Yes, half of what you need is explained at the end in the part of the film that actually moves at a decent pace. But there are still lots of bits that would not only be interesting to know but add some more depth and interest to the film.

Im giving it 3 stars tho, as a horror its not bad. It could of been much better if it was sped up and added a bit more depth.

We are speechless! What rubbish! So disappointing that we couldn't finish it - it ruined our evening!

I don't often watch horror movies as I'm not into violence/gore or cheap jumpscares; but I gave this one a go due to the critical acclaim. Firstly the positives - Collete's performance is very good and the technical stuff (lighting, music, camerawork) was sound enough that it continually gave me chills (perhaps a more seasoned horror viewer would disagree). The main negative was that I had zero clue as to what was going on. Maybe I didn't pay enough attention to tiny details, maybe I should have been looking out for clues, I dont know. With previous horror films that I enjoyed (Elm Street, Blair Witch) I knew what the storyline was and therefor I knew what is was I was supposed to be afraid of. Here I gave up assuming that the story made any sense (even in a supernatural way) and it became a 2 hour excersize in making the hairs on my neck stand up with 'eerie things' happening - (think ghosts momentarily appearing in half lit rooms to an uber-creepy soundtrack). I have to say that in the main it worked on a technical level and I remained prettty creeped throughout the movie; but also, by the final few scenes I was laughing too as I found it a bit ridiculous and had no idea what was supposed to be happening.

It has been noted that this film has some similarities to Robert Egger's 2015 film The Witch - obviously in terms of its theme of witchcraft, but also because they are both films where there was a sharp divide between critical opinion and audience opinion. Both films have been acclaimed by critics but largely unloved by audiences. In the case of The Witch, I was on the side of the critics - I really enjoyed it when I saw it at the cinema three years ago (although I would be interested to have a second look at it now to see if I still felt the same). In the case of Hereditary, I have to side with the general audience reaction, which is illustrated by the (mostly) negative reviews previously written on this site.

One difference between the two films which seems almost too prosaic to mention, but which I do think is significant, is the running times. The Witch was a fairly lean 93 minutes, whilst Hereditary clocks in at a patience-testing 127 minutes. I'm actually a fan of slow cinema, but in the horror genre there is only so much I can take of shadowy apparitions, eerie music and unsettling noises before suspense turns into boredom. Another difference (allowing for errors of memory as it's a while since I saw The Witch) is that although both films have surprisingly literal 'reveals' at the end, Hereditary lingers much longer on its revelation than The Witch did, which arguably stretches credulity past breaking point.

I read lots of audience reviews of films (on here, on Amazon etc - it's a minor obsession of mine) and one of the most common types of review I come across is the kind where the writer gets really angry because they have not enjoyed a film which was critically acclaimed. I don't want this to be one of those reviews, and yet the cynic in me can't help feeling that Hereditary is essentially a bog-standard witchcraft/possession horror film of the kind found perennially inhabiting the multiplexes, which has just been slowed down to a glacial pace and had most of the more obvious jump scares removed in order to be rebadged as an 'art-horror'.

Often when horror films are critically acclaimed the reviews tend to focus on the horror being a metaphor for something else (see Raw, Under the Shadow, The Babadook etc etc). Horror above all genres lends itself very easily to metaphorical interpretations but it seems to me like this critical approach is mainly used to try and add an intellectual dimension to films, as though being 'just' a horror is somehow not enough. This approach can easily be applied to Hereditary (e.g. mental illness, familial and intergenerational tension) but I am not convinced identifying these aspects makes the film any better or any worse.

In summary, this felt like a journey I have been on too many times before in the horror genre - two hours of smoke and mirrors before a disappointing reveal and the sense of a largely wasted evening.