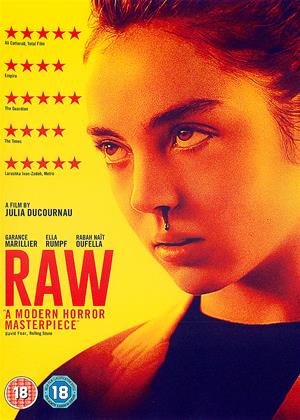 Its an Ok movie, infact if im honest its a rather good movie, Not badly made ,Not badly acted, Very French in values .

Personally I Absolutely Hated it and Everyone in it .what a bunch of truly horrible people they are in a French Vet School.

No real explanation to WHY Cannibalism crops up . no real story apart from the obvious. certainly no real hero / heroine to root for .

Vet School seemed to be all about the Students Abusing one another as much as possible all term long.

A Massive Missile Attack on the whole Veterinary School would have been a better ending for me .

You may know about Julia Ducournau’s Raw as the “cannibal horror story that caused people to faint at the Toronto film festival”. Yes, it did. And yes, the squeamish should most certainly brace themselves. But Raw is much, much more than just a brutally bloody body horror – though it is most certainly that as well.

Aside from the grisly and guaranteed-to-shock scenes of anthropophagy, Raw is in fact one of the decade’s most brilliant and beautiful coming-of-age dramas, far more a film about the challenges and apprehensions of “fitting in” than it is mindless gore.

There’s nothing mindless about this film. The characters are confused and complex as they head off to veterinary school to do what college kids do – express themselves, find themselves, explore their identities and sexuality. What happens to our protagonist Justine (Garance Marillier) and her older sister Alexia (Ella Rumpf) – daughters of militant vegetarians who took their own veterinary degrees at this most brutal of schools many years before – is something wholly unexpected. Cannibalism, indeed, isn’t present for cannibalism’s sake, but as a metaphor for… Rebellion? Disobedience? Love? Submission? Carnal desire? Yes, to all and more besides.

Raw is shocking. Raw is hard to watch. But Raw is also compelling, at times laugh-out-loud funny, brilliantly acted (Marillier is truly excellent), and one of the most original films I’ve seen in a very long time. Masterfully shot, superbly paced, and beautifully stylised, Raw is a film that cinephiles everywhere should most definitely get their teeth into.

Well, if it's cannibalism you want, I would certainly recommend watching Tony Hopkins in Silence of the Lambs or Hannibal, or maybe even Wrong Turn, rather than this tired drama which hasn't got an original bone in its body. Other cannibal movies are available.

No doubt made to appeal to and shock teenagers, I didn't find this shocking just silly - and unbelievable. Moreover, the 2 sisters main characters were so annoying I honestly wouldn't have cared if someone had stuffed em in a roasting tin and popped em in the over at gas mark 7.

The vet school featured is so fake an unbelievable - such hazing died out years ago.

I saw the final twist coming a mile off too.

The gay North African character shines in this dross like a diamond in a gung heap.

Might get a taste for it - Raw review by PW

I don't usually like horror so it was a good job this was a kind of comedy. Not that I laughed much. It seems to be an extreme way of exploring family dysfunctionality and made me think at times. The ending was unexpected and marvellous.

Just when you think it cannot become more gross, it does. To the extend that it becomes quite funny.

Utter rubbish. As other reviewers have pointed out a bunch of vile bullies intimidating younger students with a side story of cannibalism. If it's true that cinema goers found some of the movie so overwhelming they passed out then frankly they need to get out more. If the demographic this is aimed at want to watch some decent horror check out Ari Aster's and Jordan Peele's work. Avoid like the plague...now there's a movie idea!

Rarely have I watched so many unlikable characters in one film. - Raw review by AM

I really disliked this film from the opening minutes till the end. I wanted every single character to die a grisly death as soon as possible. If 'hazing' has ever existed anywhere to even half this degree I am appalled and would not trust any vet educated in such an establishment with a pet cockroach.

Also, as far as I could see there was only one grown-up in the entire facility. An odious lecturer who I also wanted to succumb to death as quickly as at all convenient. The main protagonists? Could I warm to them? Um, no.

I know it's not the point of a horror film to endear their characters to the viewer, but come on; to engage the viewer there should be someone worth rooting for !

The only plus points and the reason for the film gaining 2 stars, were the occasional gems of dark humour dialogue and some of the facial expressions, which were so well acted that I briefly, found myself warming to the film... only very briefly mind.

I would avoid this film unless you've had such a bad day that you think it might be improved by watching (implied only hopefully) animal cruelty and the worst examples of humanity it is possible to portray.

Raw, in every way - Raw review by EP

It was very graphic from the get-go and was just not very believable.

Saved from 1 star rating due to a fairly original story, a bit like Tales of the Unexpected with a French college twist...

An interesting take on a vegetarian who is drawn to meat after an unfortunate incident involving being force fed a lamb's liver. It is an oddity and all the better for it. In these days when the subject of meat vs. veggie fills the media, this film has an air of freshness and a great performance from the 18-year-old lead and her family also.