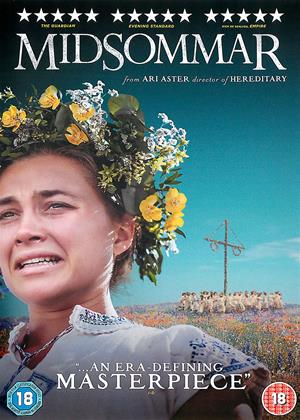 Tapping into our modern day fears - this is the cinema of unease rather than the dumb jumpscare-a-minute horrors that take up space in the cinemas. Creepy rather than scary, this dials up the terror slowly and before you know where you are you are ensnared as the characters. Midsommar is the horror of 2019 (so far). I think it's better than Ari Aster's debut Hereditary too which is surprising. The director has definitely aced the 'difficult' second film test here by developing his style into something more consistent and utterly convincing.

Clues are all around as you wonder what will become of a girl (who's overcoming a tragedy) and here 4 male friends who travel to Sweden to be the guests at a mysterious pagan worship ceremony. That's all I'll say - and I will say, go in to the film with as little information as possible - it's so much better enjoying this film cold and ignorant.

9 out of 15 members found this review helpful.

Lets make a Movie that is a Cross Between Old British Cult Movie 'Wicker man' and American Gore-tastic '2,000 Maniacs' .

Could have been Great but ,To be honest ,the Characters are such a bunch of But-plugs ,you really don't care what happens to them.

If I liked any of them I might have cared more .but they all wore me out with their irritatingly Stupid Ignorance and shallowness.

Movie felt waaay too long, Very Slow moving story line. could have been cut down a lot closer in the edit .Did we really need to know about her family at all ?

I didnt Hate it but I didnt Love it either , it was OK, Just felt Far Too Long and Drawn Out .

I might be a little biased but did not enjoy the film at all, as a pagan, I really wanted to find some enjoyment and genuine originality in the story and theme, but I find it quite disturbing that this is the ill researched way pagan spirituality is played in films repeatedly and bares no truth to how we practice its quite unsettling to see this type of film is still being made and more far fetched nowadays than its previous similar films would have been. I really wouldn't want to comment anymore other than heed a warning of not to waste disappointing viewing time.

'Midsommar' clearly owes a huge debt to 'The Wicker Man', only this time it's wierd goings on involving an isolated pagan community in Sweden, rather than the Scottish isles. However, where that movie was anchored by an interesting hook of the investigation into a missing child, this feels almost devoid of any plot, and as a result feels slightly aimless at times. It looks great, has nice cinematography and performances, but the storyline is highly predictable - as soon as the group of American teenagers arrive in the community we all know what's going to happen to them - it's just a case of waiting to see exactly how it plays out. Still, this is an improvement on 'Hereditary', in that it doesn't fall to pieces in the final act. Ari Aster clearly is a talented director - it would just be nice to see him teamed up with a more inventive scriptwriter. 3.5 / 5