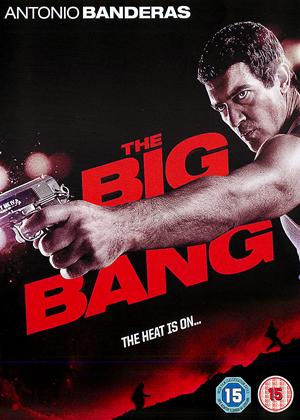 Synopsis:
Late one night, Los Angeles private investigator Ned Cruz (Antonio Banderas) gets a visit from a recently paroled Russian boxer with an intriguing job offer: find Lexie, his missing girlfriend - and the 30-million dollar stash of diamonds she's hiding. As Detective Cruz sets out to find her, the clues send him into the city's seediest corners, from a Hollywood action star with a dirty little secret (James Van Der Beek), to an enterprising porn producer who takes a personal interest in his own work (Snoop Dogg) and a kinky waitress with an unusual fetish for particle physics (Autumn Reeser). Lexie proves to be as elusive as she is beautiful and Cruz becomes obsessed with finding her.
With time running out, Cruz discovers the trail leads to reclusive billionaire (Sam Elliott), and his physicist (Jimmi Simpson), intent on recreating The Big Bang underneath the New Mexico desert. Tailed by a trio of cops also looking to find the missing diamonds, and with the body count piling up, Cruz soon realizes that what appeared to be a standard missing person's case is anything but, and could quite possibly bring about the end of the world as we know it.
Actors:
Antonio Banderas, Thomas Kretschmann, William Fichtner, Sienna Guillory, Delroy Lindo, Autumn Reeser, James Van Der Beek, Sam Elliott, Jimmi Simpson, Bill Duke, Rebecca Mader, Robert Maillet, Snoop Dogg, Robert Ernie Lee, Rachel Handler, Sean Cook, Khanh Doan, Keith MacGeagh, Anthony Holmes, Lindel Reason
Directors:
Tony Krantz
Writers:
Erik Jendresen
Studio:
Anchor Bay
Genres:
Thrillers

Reviews of The Big Bang

A movie that combines mystery, drama and particle physics The Big Bang is a strange but intriguing movie about a private detective (Antonio Banderas) who is commissioned by a Russian boxer (and criminal) to find his missing girlfriend and the $30 million worth of diamonds she is sitting on.

There is ridiculousness about this movie that makes it a little bit funny, whilst the mix of plots seems a little absurd, yet the body count and the handling of some of the darker scenes in the movie make this a really interesting watch.

Visually the movie looks fantastic, it has something of the Sin City about its darkness and almost noir-sequel city scenes, whilst the CGI is expertly crafted and seamlessly incorporated into the piece as a whole.

Banderas is wonderful, dark and witty and a little sarcastic, he shines out in the movie, although the rest of the roles are also very well cast and well played.

The Big Bang is an unexpected treat.