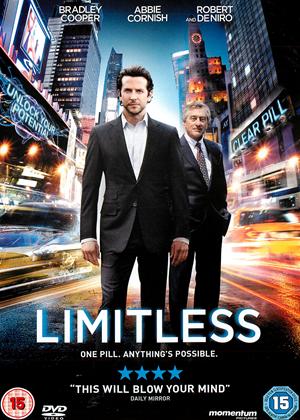 Eddie Morra (played by Bradley Cooper) is a struggling wannabe author. He meets his ex-brother-in-law who offers him a drug (NZT-48) which he claims will help him. And it does - Eddie is transformed into a man with vision and drive, tidies up his flat, writes the first part of his book - but is hit by withdrawal symptoms. He goes back for more NZT but finds his ex-brother-in-law dead, steals his stash of NZT and becomes a user. Under its influence he becomes a whizz kid, wins back his girlfriend, borrows $100k from the Russian mafia but forgets to pay it back, becomes a wizard investment analyst, makes shed loads of money, meets and impresses powerful businessman Carl Van Loon (what?!?) (Robert De Niro in a cameo role), becomes addicted, suffers serious withdrawal symptoms, kills a woman in a hotel room (or does he?), fights off Russian mafia, sets up his own NZT manufacturing lab etc etc etc... You get the confusing picture. This is a fast moving sort of sci-fi thriller, plenty of fast talking, fast camera work and assorted chases and fights - and while I enjoyed the thriller aspect, there were other parts that I really didn't like. I most definitely did not like the message that drug use is positive and if being an obnoxious loud-mouthed big-headed city trader is what passes for a successful man in New York, then count me out. It's certainly watchable, Bradley Cooper seems well suited to a role as scruffy down-and-out turned yuppie, and the always excellent Robert De Niro exudes power, but he's only on screen for 15 min or so. But there are all sorts of loose ends and oddities (why would genius Eddie forget to pay off the bad guys? slashing a bad guy's face with ice skates - still on a child?). And the ending is just so Hollywood. An enjoyable mess, if you like that kind of thing. 3/5 stars.

Could be a great film - Limitless review by tup

Plot was great, but relied on silly filming and not enough attention to detail. With more time and thought would have been a fantastic film. having said that, still very enjoyable.

this film was very goo. interesting storyline, action packed and fun. did get a bit blahh at times though but would recommend as a film to watch

Limitless is not your usual drug-related Hollywood movie, lacking in the expected grime, gangs and gun warfare. Limitless takes a somewhat novel approach, attempting to show both the – forgive the pun – highs and lows of a new black market drug. NZT-48 is a drug that enhances your ability to access the full potential of your brain. Those who take it find their reflexes honed, their wit quickened and their sight sharpened, ultimately making them a real “super” human.

Edward Morra (Bradley Cooper), an author, someone whom many would assume is already more intellectual and cultural than most, finds himself at rock bottom: writers block, unpaid bills and an ended relationship seem to dog his ragged existence. However a chance encounter with his ex brother-in-law finds him experimenting with this new drug. Within days he has completed his book, become fluent in several languages, picked up a taste for the arts, learnt how to play the stock market and found he is able to seduce almost any woman. Things begin to turn sour however when he starts to lose large chunks of time, suffer painful headaches and eventually finds himself suspected of murder. His attempts to come off the drug however simply seem to make him worse.

This film has a strange take on drug use: the negative side effects of NZT coupled with the social consequences of Eddie’s habit – including losing his girlfriend (again) and becoming embroiled with the Russian Mob – serve to demonstrate to us, the influential audience, that drugs are bad. Yet the long term effects of the drug are all but opposite to what one normally sees on screen, wealth and popularity beyond imagination. The film ends with Edward as a US Senator, no longer on the drugs having been able to harness the chemicals and wean him off them slowly, keeping their positive effects in tact. This is not your everyday Hollywood moral, yet it is also not the complete opposite. The first person narrative of the film at one point actually asks you to question where you stand on the subject and make the decision for yourself. Personally I find that quite a brave stance for a major film to take.

This intriguing moral facet of the film is about all that stands out however; it was enjoyable enough, as a whole the production value was adequate. I could not quite shake the feeling however that although Limitless is striving to push it’s audience into asking some big social questions underneath it all it was simply another money making scheme. Ironically the lose morals of the lead character somewhat mirror this behaviour and I thought that the film’s positive outcome attempts to justify Capitalist greed. Or perhaps my brain capacity is such that I’m reading a little too much into it.