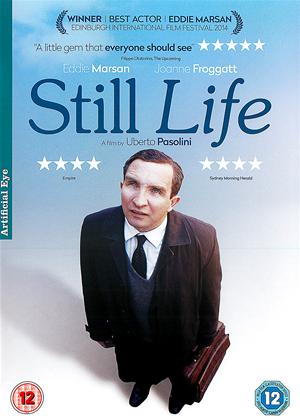 Synopsis:
Eddie Marsan plays John May, a council worker tasked with tracing the relations of those who have passed away alone. When he is one day made redundant he throws all of his energy at the last case on his desk, a war veteran who also happens to be his neighbour. As he searches for the people who once shared this man's chaotic life, his own ordered existence opens up to new and unexpected experiences.
Actors:
Eddie Marsan, Joanne Froggatt, Karen Drury, Andrew Buchan, Neil D'Souza, David Shaw Parker, Michael Elkin, Ciaran McIntyre, Tim Potter, Paul Anderson, Bronson Webb, Leon Silver, Lloyd McGuire, Wayne Foskett, Hebe Beardsall
Directors:
Uberto Pasolini
Producers:
Uberto Pasolini, Felix Vossen, Christopher Simon
Writers:
Uberto Pasolini
Studio:
Artificial Eye Film Company Ltd.
Genres:
Comedy, Drama

This is a completely absorbing insight into a man who is unemotional, undramatic, quiet and enjoys solitude. This is not a mainstream film. Get this if you want a calm journey into the mind of a simple man, not if you want a high octane romp. Eddie Marsan is one of a few actors who could act in such a subdued and subtle way. Very different to some of his previous stuff.

This is a very slight film and rather stagey. It is more like a BBC2 drama, and is not cinematic really.

Eddie Marsan is excellent as usual, though I could never really believe the character or job role either - both seem over-calculated by the writer, as a framework on which to hang a rather unbelievable plot.

Some very wooden acting in this film, esp from some of the Asian actors. Couldn't work out the ages of ex-soldiers too - some look about 80 years apparently served in the army in 1981-2. Odd.

Hated the ending, though the religious may choose to differ.

Some good scenes but a very little curiosity piece all in all. Not nearly as profound or good as it thinks it is. C grade stuff.

Just about 3 stars at a push. Without Eddie Marsan, 1-2 stars.

I love this film. It won't be for everyone. Eddie Marsan's acting is an absolute triumph of understated brilliance. Meticulously observed scenes and a wonderful little story. Also made me laugh out loud more times than so-called comedies.

I loved the ending - nothing religious about it (see PV review). I think they call it symbolic realism.

We really enjoyed this quiet, thought provoking, film. It was very absorbing even though the story line is relatively simple.

A film with real atmosphere - Still Life review by DT

I could see this film as not working for some people,not a lot happens,little dialogue,slow pace.But that is why it is BRILLIANT,i loved it & found it thought provoking,whoever picked Eddie Marsan for the part was spot on, as was he.No it is not a perfect film ,but it was probably made for about 50p & gave me a lot of pleasure(in a odd sort of way),this is why i love films.

Certainly the best film I've watched this year. The composition of each shot is composed meticulously, the colours in muted greys and blues, the haunting music, the spareness of the script, combine to make this a high quality piece of work.

But I was affected most by the story-telling, and the little details that almost go unnoticed unless you pay attention. For me, it was a story about the importance of being human, of caring about people even after their death, in a world where no-one seems to have time enough or money to care any more.

Some film critics seem to have missed the whole point, and misunderstood the ending, which should not be seen as some bizarre supernatural happy ending, but as a visual metaphor that completes the message that the film conveys. To put it another way, without the ending, we would be left with a nihilistic story about a lonely and pointless life. But I've said enough; anyone with a heart will understand.

As stated in another review, the performance of Eddie Marsan was understated but brilliant. The film certainly wouldn’t have been as strong if not for his unemotional performance, that actually provoked emotion when watching.

The sense of passion, commitment and care that his character, John May showed in his job was warming in the way that those who had seemingly died alone and were forgotten people; at least had one person who was there for them after their passing.

There was a real simplicity to some scenes but that’s what made them real and thought-provoking.

I also thought the ending was a clever piece of directing/writing that was somewhat sad, yet a beautifully touching end to the film.

Really enjoyed this film and found the story and in particular the ending very moving. What we all fear.... that we will die and no-one will care... Eddie Marsan totally convincing in this role and good to see Joanne Froggatt out of her "Anna" character (Downton Abbey).