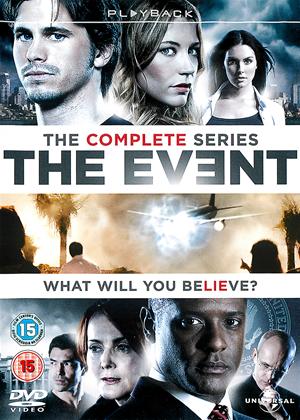 Rent other films like The Event: The Complete Series

Reviews of The Event: The Complete Series

The Event is last year’s American science fiction series about a mysterious plane crash and people who never age. A software engineer, Sean Walker (Jason Ritter) finds his plans to propose to his girlfriend somewhat scuppered when she disappears from their cabin whilst on a romantic has Caribbean cruise. Any trace of Leila or Sean’s presence on the ship prior to this strangely vanished and Walker then finds himself accused of murdering another passenger. Walker takes it into his own hands to find his fiancée and escape the police; eventually leading to his discovery of an attempted assassination on the U.S President.

Meanwhile, in a top secret facility 97 humanoid extraterrestrials have been detained for over sixty years after their plane crashed in Alaska shortly after the Second World War. The newly elected President, Elias Martinez (Blair Underwood) discovers the existence of these prisoners and decides to reveal them to the public. What he doesn’t know however is that there are other aliens living amongst the American citizens, which some members of the Presidential entourage wish to capture and also detain, whilst others wish otherwise. Unbeknownst to them all however is that the CIA agent chosen to lead the investigation is an alien himself.

At 22 episodes to a season the series banks on the intriguing concept pulling audiences through to the finale, but after the initial rush of plot and narrative twists the show falls flat. Writers, cast and directors promised clues and shock reveals in every episode, the problem however is that there is only so much information the story has to offer. After a while the audience find themselves simply watching various members of the cast discovering things the audience themselves have known for several episodes.

It is a shame because at first the show seems quite promising and the first three or four episodes are intriguing but it soon fizzles out and subsequently the show has been mocked for the irony of its title as very little seems to happen for the majority of the season. As with most American shows the final three or so episodes are action packed and bring the show back up to its original standards. It’s unlikely however that many will bother to stick it out to that point.

The series has recently been cancelled by NBC and as of yet will not be returning for a second season.