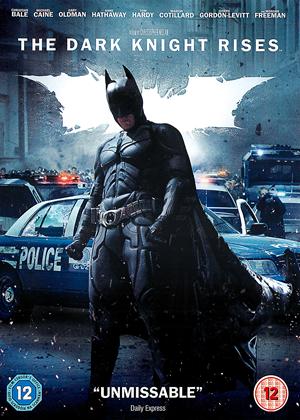 Reviews (5) of The Dark Knight Rises

Reasonably satisfying conclusion to Christopher Nolan's Batman trilogy, but not the best - The Dark Knight Rises review by RP

'Avengers Assemble' was too silly and took itself too seriously. The Spiderman remake/reboot unfortunately suffered from the 'remake syndrome' - by definition, it wasn't very original, although it did offer some novelty and a degree of humanity to its tale of a comic book hero. But I rather liked Christopher Nolan's third Batman film, even though it's too long at over 2½ hours, there's too much scene-setting and not enough Batman action until well into the film, the entire nuclear-bomb-in-the-city plot is both old and not very well done, and the film is full of plot holes. A bullet-proof batsuit that doesn't stop a knife? Remove the core of a fusion reactor to make a bomb - in minutes? Batman escapes from an underground prison in India (I think) and returns to Gotham in minutes? But these are minor issues...

I guess the reason I liked it is - in common with the other Nolan-directed Batman films - it's so dark. And it has a 'proper' baddie, in this case Bane (Tom Hardy) who's a nasty piece of work. Not up to Heath Ledger's psychopathic depiction of The Joker in 'The Dark Knight' but definitely bad, unlike the wuss Loki in 'Avengers'.

Ann Hathaway makes a good second-string baddie/goodie as Catwoman and steals just about every scene she appears in. Add supporting roles from Gary Oldman, Michael Caine, Morgan Freeman, Marion Cotillard etc and that's a fine cast you've got there...

[Aside: perhaps sadly, I did watch the end credits and noticed rather a lot of Nolans in it, as well as small parts for Liam Neeson, Cillian Murphy, Tom Conti, Mathew Modine, uncle Tom Cobley and all]

I enjoyed it and I'll give it 3/5 stars - a reasonably satisfying conclusion to Nolan's Batman trilogy, but not his best.

Mistake - The Dark Knight Rises review by BE

I thought I had ordered the Dark Knight movie with Heath Ledger in it. Wrong! I don't usually enjoy this film genre. I became bored with this one but have given it three stars for effort.

This is the best batman movie I have seen. Great story about Bane and the prison hell hole he was in, which is key to everything.

Bale is at his best here, as a washed up crippled recluse who makes the comeback as the Batman.

Hardy is exceptional as Bane, a lunatic dictator of a villain, who talks to the people about being their liberator like some Marxist revolutionary.

Loved Anne Hathaway's Catwoman, ruthless but with a heart under the hard exterior.

Last but not least, the superb Marion Cottiard in a smaller role as the humanitarian Miranda, delivers her usual acting brilliance.

An A1 cast deliver an A1 film.

So much mumbling made it difficult to hear some of the sentences even with the sound well up. Poor story line, too long and drawn out and certainly he worst of the 3 films.

The final film in Christopher Nolan's epic Batman trilogy is slightly overshadowed by the class of the previous film but it remains a great action adventure film that brings the stories from the two earlier films together and makes a very satisfying conclusion to the trilogy. The story picks up eight years after the conclusion of The Dark Knight and Bruce Wayne (Christian Bale) has retreated into seclusion having taken the blame for the crimes of Harvey Dent. But when a very powerful criminal, Bane (Tom Hardy) takes over the city and holds it to ransom with a huge nuclear bomb Wayne has to return to his alter-ego and bring Batman back. Unfortunately he finds he's now broke and that Bane is no pushover. The regular cast - Michael Caine, Gary Oldman, Morgan Freeman - are back and new characters played by Anne Hathaway, Joseph Gordon-Levitt and Marion Cotillard amongst others enhance the story. And it is a great one too, from the opening set piece that rivals anything in a James Bond or Mission Impossible film to incredible action scenes scattered throughout. Hardy is superb as the powerhouse bad guy, hidden behind a mask that keeps him alive and with a very original accent. It's great stuff and makes the whole trilogy worthwhile viewing. Nolan's ability to make big budget, spectacular action cinema for grown ups that feel like intimate crime films is what makes these so special.