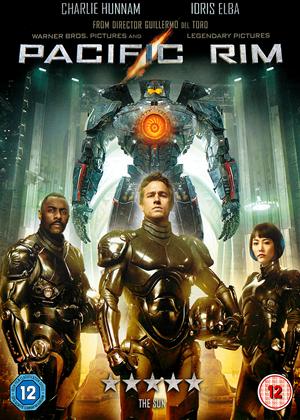 Was really looking forward to watching this film but to be honest was disappointed.

The special effects are amazing but that's all that's good here - the acting and script is dreadful and very 'cliche' you have the guy with the troubled past, his love interest and the 'maverick'

Definitely one for the boys - don't think too much, just sit back and enjoy the epic scale - Pacific Rim review by RP

Great special effects, plenty of crash-bang-wallop, wooden acting, poor script. Think of Godzilla v Transformers and that's about it. Definitely one for the boys - most 12 year olds will love it.

And yet I liked it. I appreciate Guillermo del Toro's work - especially 'Pan's Labyrinth' and 'The Devil's Backbone' - so I started to watch this with high expectations. Certainly there is consistency in the characters, there aren't too many of them, and the plot is pretty easy to follow. The action sequences are excellent (helped by much CGI of course) but it does boil down to fisticuffs between robots and monsters.

There are a couple of unfunny 'comedy' scientists, the rousing speeches don't rouse, the macho posing is a bit too much for me, there's too much shouting - but at least the female lead is there for her fighting qualities rather than her body. As for the storyline, it has clearly been 'borrowed' from Japanese mecha anime - but that's no bad thing.

Watch it on the biggest screen you can, don't think too much, just sit back and enjoy the epic scale. 4/5 stars.

So bad its BAD - Pacific Rim review by CP Customer

I thought this was going to be a fun homage to B Movies. How wrong I was . It was similar to something that they would show on the SYFI channel.

Bad acting, bad script and it seems to go on for ever.

Seriously what is that ending all about ?

Pacific Rim (2013) - Niether really likeable, nor unlikeable - one for older kids if anything - Pacific Rim review by CP Customer

This can be summed up very easily - updated godzilla type creatures of various types want to kill us all, futuristic enormous human controlled and ridden super-sized terminator robots come to the rescue in both oceans and rain sodden utterly destroyed cities.

Good old US of A movie making hype at its best. If you like special effects this is for you - a decent plot or anything else - forget it.

Niether really likeable, nor unlikeable - one for older kids if anything

When Stephen Spielberg’s Jurassic Park come out in 1998 it was trendsetting cinema that showed that huge creatures and action on a giant scale could be captured on film, something that has affected a huge number of action films ever since and Pacific Rim is no different as it uses the same principles to create something grander and more visually stunning, but is still somehow let down by its story and characters.

Pacific Rim tells the story of Raleigh Becket (Charlie Hunnam) and his return to a futuristic defense force tasked with protecting the world from massive creatures called Kaiju with equally gigantic robot fighters called Jaegers. As the Kaiju get stronger Raleigh and the people who operate the Jaegers prepare for one last ditch effort to finally rid the world of the threat these creatures pose.

Director and co writer Guillermo Del Toro brings his own signature flair to this world of monsters and mechs but his voice and vision seem to have been drowned out by a story that thinks its a lot more impressive than it actually is. Rim plays like a Godzilla rehash and while looking superb it never really feels like a serious film despite the characters insistence that the world they know is ending.

Unsure of what it really wants to be, Pacific Rim straddles the boundary between a B movie monster film and a big budget action film. Del Toro puts almost all his efforts into making every fight seamless while neglecting the many characters this story has to service. While Hunnam is the hero, most of the films time is spent with Stacker (Idris Elba), the leader of the Jaeger program and Raleigh’s superior officer.

Elba is excellent as always and ultimately he feels like the real main character with Raleigh feeling like a footnote in Stacker’s life story as he proves to be a much more interesting hero to follow as he acts the way a hero should instead of Raleigh who spends a large portion of the film acting like a self entitled jackass.

It’s unconventional in its commitment to a story taking place in a world where mankind are like pawns on a chess board but ultimately its just an action film, a good looking yet badly thought out story that can be breathtaking but never something you find yourself invested in