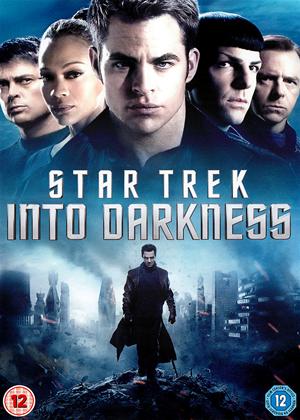 Reviews (4) of Star Trek Into Darkness

Nice visual effects - shame about the rest of it :( - Star Trek Into Darkness review by RP

This is definitely a film for the boys - lots of crash-bang-wallop, chases, fisticuffs in space, explosions, spaceship crashes, flashy visual effects and plenty of technobabble. While I liked the 2009 Start Trek reboot, this current film is a bit of a disappointment.

Directed again by J. J. Abrams, he manages to assemble the same main actors with the too-pretty Chris Pine as Captain Kirk and introduces the also too-pretty Alice Eve as a weapons expert and the rather good Benedict Cumberbatch as super-baddy Kahn (now, a Brit as a baddy - who'd a thunk it). There also seems to be much use of blue contact lenses to make everyone look good.

I won't go over the plot, such as it is, only to say that it's weak with a weak script and dodgy dialogue - especially that from Simon Pegg with an extremely dodgy Scottish accent.

Not bad, just average. And the visual effects are rather good. 3/5 stars.

I really enjoyed JJ Abrams first Trekkie film, so I expected this to be good. I love the original Star Trek series and it's philosophical plots. Unfortunately, this movie was total rubbish from start to finish. Ridiculous life and death scenarios that it's impossible to suspend disbelief. Shockingly bad script. I kept expecting the actors to turn to the director and exclaim "My character would never say that". The film makers are overly relying on the viewers having fond familiarity with the well known characters and their personality quirks, which has made them lazy about fundamentals, like the script, believability in how the characters interact with each other or react to the deaths of colleagues and friends. I suppose they thought Trekkies are so fanatical, they'll pay to see any old rubbish. Special effects are in abundance, but there's nothing special about them. They doesn't save the movie. In summary - no substance, nothing intriguing, full of obvious cliches and wholly unsatisfactory.

Amusing, true to the franchise - Star Trek Into Darkness review by AB

This is superb - for those of us who have followed the whole franchise from start to the latest, this is amusing, well-acted and fits in nicely with the step forward from the re-boot of the ST experience from the 'young' Kirk etc.

The actors who play Scottie and Bones are superb - the phraseology, intonations, mannerisms, reactions and whole demeanour are perfect for the development from who they are to who they will be.

The scenes are also well-scripted and blend in well with what is already known/what has gone before in the Tv series and films - the scene where Kirk is trapped in the radiation-flooded engine room contrasts perfectly with The Wrath of Khan. Poetic genius.

The timeline is a bit warped (eg the death of Pike, the details of the demise of Khan) but as the various fansites say, it is an alternative to the "Star Trek Prime" but it loses none of the impact.

Ignore the naysayers in other reviews here - sit back and enjoy and engage your brains to remember where all the ideas in this film originated from.

Excellent casting to get plausible follow ups for the Star Trek favourites. Simon Pegg is pretty banal to be fair, as chief engineer, mainly due to poor Scot accent.

Great fun though, and good follow up to one. Trekkies will love it. Bit weak on story etc so give it 3 rather than 4, but good fun.