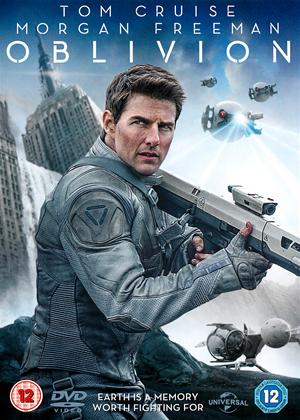 It's a post apocalyptic earth after an alien invasion. Only Tom Cruise can save the world (again). - Oblivion review by RP

It's a post apocalyptic earth after an alien invasion. Only Tom Cruise can save the world (again). Err, that's it.

I've recently seen Tom Cruise in 'Edge of Tomorrow' and now here I am watching him in another sci-fi film and (of course) Mr Cruise yet again takes it on his shoulders to Save The World.

The film is - as perhaps we should expect these days - visually spectacular, but humans are a bit thin on the ground and the film is essentially a two-hander with Tom Cruise doing the action things and a well-groomed, very English Andrea Riseborough staying home in her tower and telling him what to do.

That is until the sleep/crew module from an old spaceship crashes, Tom rescues one survivor and begins to doubt who and what he is. There's also a bit part for a criminally underused Morgan Freeman.

Tom Cruise isn't one of my favourite actors. The roles he chooses are often too goody-goody, too good looking, too straight - and in this film, even in the supposedly romantic moments, too wooden.

The film is very derivative and reminded me very much of 'Moon'. The 'twist', such as it is, is obvious and easily guessed. The film is derived from a graphic novel (a posh name for a comic book) by director Joseph Kosinski. It's 2 hours long, slow to get going, it's quite pretty to look at - but it's stodgy stuff.

After seeing Mr Cruise in 'Edge of Tomorrow' which has more action, more aliens - indeed more people - and which I quite enjoyed, I found this very average indeed. On that basis I might have given it 3 stars, but unfortunately the 'twist' is so obvious that I'm going to mark it down to 2/5 stars.

Keep watching - it gets better - Oblivion review by AB

As said, Tom Cruise seems to do the sci-fi stuff more and more these days and this was better than most films that he is in (cf the rubbish that is Mission Impossible in all its guises)

The storyline was not bad and had me guessing a bit for a long time.

We didn't last the first hour of this film - we kept hoping one of the creatures lurking in the caves would kill Tom Cruise horribly and do us all a favour. What on earth you need three inch heels and false eye lashes for when manning a space station is the big question. Women have rarely been portrayed in quite such a facile way in film since the 1950s.

Robocop vs Mad Max & Independence Day all rolled into one! - Oblivion review by CS

Without wanting to be a spoiler, just in case you watch the film, this is a blatant mix of Mad Max vs Independence Day with lashings of Star Wars thrown in for good measure. Oh and a spot of Robocop style Droids! The storyline and plot are paper thin and weak as a babies bladder! The acting is average, with Cruise and Freeman doing what they always do, as if they're just doing it for the money and have a paycheck glean in their eyes. The trouble with this film is that it has been done so many times before, that there's nothing to lift it up. There is no soul, no emotion, it just leaves you feeling empty, thinking that I'm glad I didn't pay good money to see this at the cinema! The one saving grace for the film are the computer generated graphics. there is some very slick styling going on in the designs of clothing, gadgets and the house, but you need more than slick graphics to make a film. A plot helps for a start, then some acting and a storyline would help also. Nope, one for the bargain bin methinks!!

Oblivion doesn't take much time to be amazed by, at least visually, as it it directed by Joseph Kosinski, the director of Tron Legacy, a visually beautiful film that unfortunately didn't live up to its, well, legacy.

Oblivion however learns from Tron Legacy's mistakes as Oblivion has a wealth of emotion to it that Tron lacked. The film tells the story of drone repairman Jack Harper (Tom Cruise) and how his life is altered with the arrival of the mysterious Julia (Olga Kurylenko).

The film is facinating science fiction and has the imagination and visuals to back it up with every aspect of this films look having been crafted specifically to bring out a certain tone. Oblivion is ultimately a mystery film as Jack attempts to figure out how he figures into this world and who he is as a person. Cruise is dynamic as the inquisitive repairman and the script really puts a lot of detail into this hero but it is a film where almost every other character is paper thin with very few characteristics and almost no personality.

Despite the film’s small cast it still doesn't quite know what to do with most of them. While Julia acts as the catalyst for the movie, her importance to the film beyond that is limited because she is badly written and performed by Kurylenko. In fact the only fleshed out figures are Jack and his assistant Victoria (Andrea Riseborough), a naïve but tough woman who is Jack’s only real companion. This core relationship makes up most of the run time and the chemistry between the two of them is excellent even as the two come to disagree about Julia's mysterious arrival. Oblivion tells a well crafted story and has a strong central cast even though their characters have very little to them but that shouldn't stop you because it's a film that strives to be amazing, it may not be quite up there but I'd rather watch a film that tries than one that doesn't even make an effort.