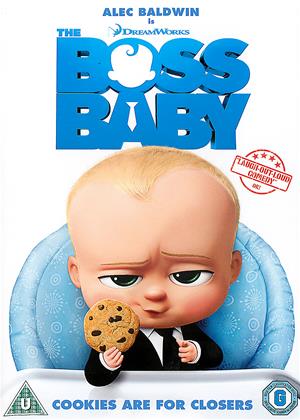 Reviews (2) of The Boss Baby

Hilarious - for all the family! - The Boss Baby review by BS

Very funny from pretty much start to finish, and a visual feast. Would recommend for animation and comedy fans any age.

Boring from start to finish, over hyped and nothing new! - The Boss Baby review by CS

I thought this film set some very bad examples for children and even made suggestions that could put children in extreme danger! Such as cycling in front of a speeding train on your pushbike, riding carelessly down main roads, jumping into vats of acid, closing your eyes to danger and choosing instead to live your life in a fantasy world, completely oblivious to any danger around you! There is one thing trying to see things from a child viewpoint, but as a film maker, you also have a responsibility to teach children about danger and how to avoid it, not to encourage them to behave recklessly!

Dreamworks, Pixel and many other Cartoon Studios seem to have become lazy in their use of templates and I keep seeing the same templates used for different characters in most of the films they are now making, this one being no exception!

This film offers nothing new, it’s a tired old storyline, the gags fall flat, the scenes and action sequences have all been done before, the editing is really choppy and any sense of direction seems to have been lost. In fact I felt that this film was merely a re-hash of many others that have come before!

I actually found it really boring and not funny at all, there are one or two gags that stand out, but most of it is very samey. As an adult I was very disappointed and you know what the kids think if they start to lose concentration as well and don’t want to watch it again!

In all, could have done better, try something new and stop being lazy!

When DreamWorks was adapting the short children’s book of The Boss Baby into an animated movie, they probably started with the funny idea of having Alec Baldwin voice a baby as a slick-talking executive. And, yes, that is a funny sight, but how long can it be funny? A short, perhaps. A series, maybe. But for trying to concoct an adventure story around such a character makes this DreamWorks production come off as more of a misguided product tie-in than a story. You pay for the cute baby jokes, the frenetic animation and a handful of adult gags slipped into the script. Same old formula, same old problems.

It’s best not to think to broadly about certain concepts for this animated film, less they become convoluted messes. Boss Baby barrels fearlessly into its overly-complicated setup that could take a cue from 2016’s Storks in revealing a world of babies through alternate channels. Up in the sky, in what I assume is a mechanical heaven based on the clouds and the inclusion of the song “I’m In Heaven”, babies are created by a machine and determined their placement based on a tickle test. If a baby is ticklish, they are assigned to Earth for the family they are born or delivered to for the rest of their life. If a baby is not ticklish, they are assigned to the management offices of BabyCo, a company of immortal babies devoted to making sure babies are the cutest entity on Earth. Their biggest opponent: puppies. And there just happens to be a top-secret breed of puppy in the works that could threaten the cuteness level of babies.

This is one of those times where I feel as a critic that I’m ill suited for talking about a film that deals with cuteness output and a company run by babies. By this point, the average adult would tune out and just gaze at their smartphone for the remainder of the picture that keeps their kids quiet. Well, sorry, DreamWorks, but I stayed awake for this one, even with my child in tow. And I will question why you created BabyCo as some otherworldly operation that looks down on Earth while the competing PuppyCo is a real human company. I will also question the inconsistencies of this story deciding on being part of Tim’s imagination or not, as the movie frequently suggests both possibilities. It’s movies like these that display how Pixar is a superior studio that thinks through their world before stampeding towards the easy jokes.

Because all this story amounts to is a series of baby jokes from the suit-wearing Boss Baby (Alec Baldwin) besting his appointed brother Tim (Miles Bakshi). To Tim’s parents, Boss Baby is an average baby that has all the same needs and wants as any infant. Behind those closed crib walls, Tim discovers that the baby can not only speak the perfect English of an adult, but also has the mind of an adult executive. He holds secret meetings through his toy telephone, hires on other babies for his team of infiltrators on the puppy mission and has a complete disregard for the feelings of his brother. Sure, this is all funny stuff, but in mere bits and pieces. It is a fairly amusing sight when Tim attempts to reveal the baby can talk with a recording of him speaking, leading to a ‘70s style car chase through the backyard.

It’s only when the movie starts trying to form a plot to make excuses for the expected villain and manic chase scenes does the movie’s spirit begin to dwindle. The explanations continue: the employees of BabyCo are able to remain intelligent and immortal so long as they consume a special baby formula. Thanks to a betrayer of BabyCo, telegraphed early on in the picture, the formula has made it into the hands of PuppyCo and they plan to unleash an immortal puppy that will corner the market on puppy cuteness. The screenwriters went to an awful lot of trouble constructing such a ridiculous script, but they seem to forget the most basic of plot holes for their ideas. Wouldn’t the market for puppy cuteness stagnate if a puppy never dies and nobody wants more of these puppies? And now I’m questioning the logistics of immortal puppies affecting marketability of cuteness. How far have I come in life?

When the movie isn’t trying to make my brain explode with this ludicrous concept, there are a few decent jokes. I like the very idea of an intelligent baby the speaks of memos and sushi, but still has a difficult time reaching high enough objects. I appreciated the relatable concerns of Tim for a baby hogging the attention of his parents, even if this concept is almost instantly thrown out the window. And as much as I wanted to appreciate the story going bonkers from its relatively simple beginning, it piles on an awful lot of average for an animated comedy. As a series of gags, the movie is serviceable as an amusing distraction, but not coherent or charming enough to hold an entire movie. Yes, it will keep the kids occupied, but with all the thrills and intellectual stimulation of jingling keys.