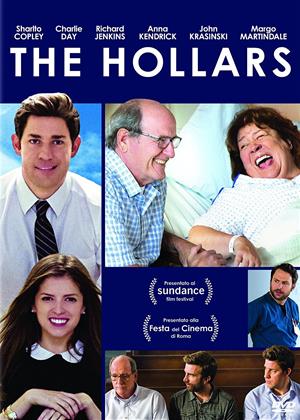 Not released
Digging for Fire

Reviews of The Hollars

I’m sure there will probably be a scoffing and dismissing of The Hollars as yet another tired and formulaic dramedy of a dysfunctional family coming together amid tragedy. I get it, but, at the same time, I get this. Every once in a while a film of this nature manages to find just the right sweet spot that tugs on the right heartstrings with its drama. And I must be honest and admit that The Hollars, as hokey as it may be, did hit me with a palpable punch of emotion.

The central conflict is that mother and grandmother Sally (Margo Martindale) has a brain tumor. She has to have surgery and everyone quickly springs to her bedside at the hospital. Her husband Don (Richard Jenkins) is initially in disbelief about her situation as much as he is denying that his business is failing. Don’s son Ron (Sharlto Copley) is already present considering he lives with his parents amid a divorce where he is so desperate to see his two daughters that he’s willing to sneak into his ex-wife’s house to see them. The one who must make the trip back home is John (John Krasinski), a graphic artist that is expecting a child with his girlfriend Rebecca (Anna Kendrick) and is having his doubts about making this work.

There’s no surprise here that everyone visiting mom has their problems and fears, understandably so. And this is clearly posed as a feel-good movie so that even when tragedy may become dour, there’s an overall sense of peace and understanding by the final frame where everybody learns a little something and gets along a little better. A volatile story could have been John considering he returns home to an old flame he can’t avoid even if she has a baby. He especially can’t avoid her since her husband (Charlie Day) just happens to be a doctor helping his mother before surgery. But this is an arc that comes to a sort of assured conclusion of John’s true feelings that doesn’t result in a bitter resolve. There’s something to be said of how honest he becomes after meeting his past and how quickly he comes into the embrace of Rebecca.

There are also plenty of moments we expect throughout such a story, including a number of heart-to-heart conversations the family has with each other when times seem tough. But there’s something genuine about these scenes that kind of resonate in their simplicity. Some scenes carry a sweet relatability, as when Rebecca takes a cab to see John and cuddles up against him complaining somberly about how her ass hurts. Another scene features John relaying the information to Sally that he’s having twins and somewhat terrified, resulting in a hug of understanding.

I can’t exactly blame others for not being so easily one over by such a melodrama. It just happened to tap on just the right notes, which will probably resonate better for parents more than anything. The cast delivers some charming and understated performances with the most astounding perhaps being Charlie Day who still acts as the comic relief but reels in his louder nature. It’s a somber feel-good movie with mileage that varies, but I kinda dug some genuine moments of emotion, sappy as it may have been.