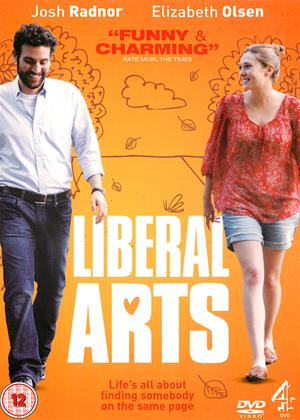 MANHATTAN WITHOUT THE JOKES - Liberal Arts review by CP Customer

Good lord why did you send me this?! I'm sure I didn't ask for it!

It's been a while since I've seen such a self obsessed, self deluded shard of smug. I kept expecting jokes to come but at no time did this raise a smile. It's structured like a comedy, what with the crazy (but so wise) slacker, the neurotic liberal arts guy at it's core; Elizabeth Olsen as the whimsical late teen/early old lady role; Alison Janney (actually wandered in from another, better movie) as the soulless teacher of Romantic Literature (or was that the joke?); Richard Jenkins as the retiring teacher who it seems is going to a dark corner, then...well, not.

I did laugh at our hero wandering around New York gurning at people as he listens to random bits of classic music which the young(yet old) Olsen has turned him on to. No one hits him. It's New York, just just don't behave like that and no expect at least verbals.

And the Manhattan connection: older guy with age inappropriate partner finds she's wiser than him. Or something.

I've had candy floss with more gravitas than this movie.

I really, really loved this film. It's about nostalgia, and the sense that everyone has of growing up and older, and how to recognise it and acknowledge it. The characters are beautifully written and played, and completely believeable.

The writing is brilliant, but not in a "clever clever" way - when someone says something insightful, it really feels like they've only just thought of it themselves.

Liberal Arts serves as a fitting follow up to director Josh Radnor's debut feature Happythankyoumoreplease as it deals in the same thematic currency as Radnor continues to exploit the idea of a man stuck thinking like a boy, a man in swift need of a good kicking. However he makes Liberal Arts that much better by making this discovery poetic and relatable unlike the previously mentioned moreplease.

The film follows Jesse (Radnor), a man skirting around academia without actually taking part. an admissions officer who desires his college years back when he debated poets and philosophers and had the time of his life. When he meets Zibby (Elisabeth Olsen), a student at his old alma mater he sees himself and can’t help but feel a connection that might reignite his college days.

Olsen is delightful as the old beyond her years Zibby as she shows the depth of her character and her air of intelligence while still making her susceptible to the kind of young naive ideals Jesse still clings to. Radnor is perfectly suited to Jesse, a guy still dealing in true love and the strive to be a better man, where everything is black and white and his life after college hasn’t been a complete waste of time. Radnor makes us believe the lies Jesse tells himself everyday.

Radnor has proved himself a smart writer and director and Arts more than proves that but the film really shows itself in the way it sets up this wayward relationship, in how each of us can understand that need to feel younger and older at the same time and how these two can find that in each other. Zibby and Jesse are wildly wrong but thats kind of whats right about the film in the first place.

Radnor has crafted a love story not so much about the way it turns out but who it turns a person into, how we learn from people, your teachers, your friends and the ones you love the most. Olsen clearly has a bright future ahead of her but now I think that Hollywood has a place for Radnor after How I Met Your Mother comes to an unfortunate end.