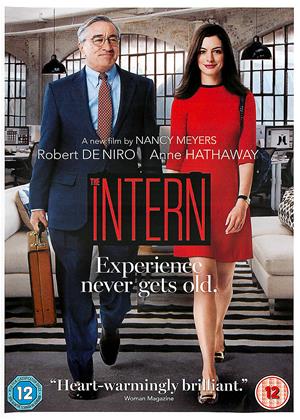 Anne is now in charge, and Robert is the intern/PA. Twist on a theme. Think the lead lady could have been, maybe would have been, a bit more hard-ball?

Hard to see how Anne's character would have been tough enough to get to the top of the pile, but quite a nice little film.

Robert starting to make just about anything that comes his way!

Dirty Grandpa looks pretty much desperation level. Not seen it yet, but the trailer does look the pits.............

It's not a comedy (you won't laugh). It's a romantic-comedy, or a quality chick-flick. Not a bad movie, pleasant to watch and relaxing. But not worth seeing a second time.

A great feel good movie. Robert De Niro is wonderful as always and Anne Hathaway is great too. A novel tale with no content to offend.

Too long, too twee - The Intern review by CC

I suppose this will provide eyewash for De Niro fans who've foolishly subjected themselves to Dirty Grandpa but I'm toiling to see much else to recommend it.

The performances are ok but this just doesn't have enough about it to carry the themes it's aiming for.

And the last half hour felt interminable.

Mostly quite sweet but predictable, not actually carrying the feminist message it thinks it is when you consider the plot and really a bit dull.

Too good to dismiss, not good enough to be satisfying - The Intern review by MD

Not one of Nancy Meyers's best offerings, but a pleasant enough diversion if you want something light and (reasonably) fluffy. The set up, in which de Niro's old-school businessman joins an internet start-up company, is highly implausible, but actually well handled. He has a lot of fun with the many "this is now, that was then" moments, and the film in general has plenty of nice touches regarding modern living. Hathaway is solid without being really convincing, but the film's real weakness is the second half, in which de Niro gets sucked into Hathaway's personal life, and a sub-plot involving his own growing relationship with an older woman (Rene Russo) is randomly introduced. Here, the movie seems to lose focus and direction, and the inevitable "feminist" message at the end is only very awkwardly put across. On the whole, it's too good a film to dismiss out of hand, but not good enough to be truly satisfying, hence the dead centre 3 star rating.

Watchable but twee family comedy - The Intern review by PV

Robert De Niro in comedy cash-in mode again here. A rather silly film with some good bits in it - that's how I'd describe this.

Just couldn't believe the set-up though - but hey, it's just a dramatic device.

Hated the twee family set-up and the 'working woman' spiel though. The very idea someone who could set up and run a large company couldn't manage so clear a desk or eat breakfast is just plain daft too.

This is the sort of pleasant, inoffensive, mildly amusing girlie film you'd take a girlfriend to on a first date.

Forgettable twaddle, but raises a laugh now and then especially with the clash of generations - lots of gags there that ring true (which much of the rest of the movie doesn't). The dodgy driver subplot is a nonsense, and some of the coincidences in the plot are as silly as they are unnecessary.

It's a 'meh...' movie and as such get a limp 3 stars. Not good or bad or memorable in any way. But a passable feelgood film.

A nice-enough 'feel good' film but, oh my, the poor diction - The Intern review by RS

As the title says..it's a fluffy 'feel-good' film. No violence, swearing, sex or nudity! The eponymous PC film. The storyline is, however, as predictable as they come but a pleasant enough way to spend an evening curled up by a roaring log fire.

But the diction! Or more specifically Anne Hathaways' diction. I have an aversion to the way most American young women (and some not so young) speak. Most of them sound like a gerbil being slowly castrated but Anne Hathaway takes this to an all-time low by force feeding the gerbil some helium. Her diction is so bad that halfway through the film, we admitted defeat and turned on the sub-titles.

Good to see a slight return to form for Robert De Niro, although nobody like his lovely old man guru actually exists in real life. Anne Hathaway is as watchable as ever and her moments with De Niro are much better than the material deserves. A good family film though.

Middle-aged man going nowhere - The Intern review by AS

Single-sentence synopsis dragged out to two hours. Plodding, repitive narrative and virtually no plot. Several points introduced but never pursued. One-dimensional characters: Hathaway far from manic enough; De Niro pulling his usual gamut of faces. The 'boys' were seemingly plucked out of a 1980s TV sit-com. The squeaky-voiced cute kid dates back to the '30s. If you want to see/hear how this sort of thing should be done, watch a Frank Capra movie, listen to some Garson Kanin/Ruth Gordon dialogue.

It was ok. - The Intern review by LV

Very similar feel to Devil Wears Prada but not as good. It's not terrible but wouldn't watch it again. Actually didn't need to watch it all the way because it was a bit predictable.

In 2013, Vince Vaughn and Owen Wilson starred as old salesmen amid young geniuses in The Internship. They’re out-of-touch men by the beginning and web developing gurus in just a few short months. These were my initial fears going into The Intern, a movie of similar title and premise. I wasn’t looking forward to watching Robert De Niro play the old fool as he slowly becomes the hip grandpa of the modern office. But, in a surprising move, The Intern ends up being a more sympathetic and sweet picture about an old man trying to break into a new world of work.

Ben Whitaker (Robert De Niro) is established as a likable former executive and widower. He take on an internship at an internet startup not out of desperation, but boredom with the retired life. At the age of 70, Ben’s entrance into an internet company may seem foreign and frightening, but he approaches it like any other job. He shows up in a suit and tie with his spiffy suitcase and approaches every objective with a smile and great attitude. The young people surrounding him can sense his good nature and do their best to help him out, but not baby him with his tasks. They know he’s capable just as much as he does.

As an intern, he is tasked as being the personal assistant to CEO Jules Ostin (Anne Hathaway), a frazzled woman with tight schedules and a hectic job managing a company. Again, she is a character that is never really portrayed as a shrewd or cartoonish. There’s something oddly real-world and empathetic about Jules the way they establish her as a leader in need of some help with her company and family to maintain. In steps the wonderful Whitaker to take care of her mounting tasks and hopefully learn to relax.

If all of this seems a little mushy and sentimental, you’re not wrong in the assumption. Even when presented with tougher drama of Jules’ life in the second act, this story is kept very light and fluffy. De Niro and Hathaway are charming individuals to an absurd degree. Though they face certain challenges in their choices with career and life, there’s an air of ease assuring us that everything will work out okay.

Though appearing as an overly sugar-coated dramedy, I found it shocking how this picture didn’t give me a toothache. Maybe I’ve seen too many of these sweet and low dramedies that become so formulaic and mean-spirited, but The Intern slightly won me over with its charm. The more it went along, the more I expected some lame gag to spur forth and topple this picture over the edge. The fact that the picture refuses such easy traps for writing and laughs was rather impressive. De Niro is not trotted out as some inept elderly puppet who needs a social media makeover. Hathaway is never forced through a half-assed mountain of petty troubles to require the assistance of De Niro. These characters are so surreally honest and lovable that I didn’t believe such a picture was possible in a movie landscape that demands top-tier actors be made into slapstick baffoons for a laugh.

The Intern isn’t a perfect movie as it plays it a little too safe for these charming characters. I liked them so much that I wanted to see them thrown into worse situations; not to watch them fail exactly, but to see just how well they can land on their fleet. It’s a soft movie, but perhaps soft is the best route to take for a premise that could have gone down a worse road of tired gags and plotlines. If it doesn’t challenge these character types, it at least gives the audience a therapeutic break from the formulaic pattern of these pictures.