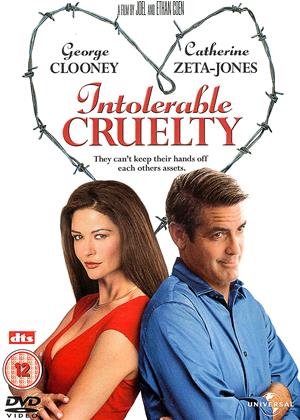 Although I'm usually a big fan of the Coen brothers, I missed this when it first came out because it seemed to fall off the radar almost immediately. Maybe that was because it's a rare dud from the usually reliable Joel & Ethan.

Part of the problem is that the tone is too light. The main characters - a successful divorce lawyer and a serial gold-digger - are rich, good-looking, thoroughly spoilt, and altogether appallingly selfish. Who cares what happens to people like that, unless it's horrible? Alas, from a very early stage it becomes apparent that, by an amazing coincidence, the two characters who are far and away the best-looking, as well as being played by the biggest stars, will eventually find true love with each other, and we're supposed to cheer because love is the one thing they don't smugly have far too much of already.

What they really deserve is a zombie apocalypse, but sadly there isn't one. The tone does get ever so slightly darker and nastier for a while towards the end, but it's much too little, much too late. George Clooney certainly has immense charisma, but expecting him to single-handedly carry the entire film with nothing but his winning personality doesn't work any better here than it did that time he was Batman. As for Catherine Zeta-Jones in what's actually quite a small rôle, she's the human equivalent of one of those spiders that eat their mates, and we're supposed to like her just because she's beautiful.

The Coens have shown repeatedly that they can do comedy, they can do nasty selfish people inflicting complicated unpleasantness on each other, and sometimes they can do both at once, but this time round, nothing quite works. The humor is mostly leaden. One minor character is screamingly camp for no reason other than to distract our attention from the dullness of the rest of the scene. George Clooney and his sidekick have an incredibly contrived conversation about the Sherpa mountaineer Tenzing Norgay which I think we're supposed to laugh at because "Tenzing Norgay" is a wacky name if you're not a Sherpa. And of course there's the peculiarly pointless way the music of Simon and Garfunkel constantly pops up, as if any recurring motif qualifies as a running gag whether it's funny or not.

If the Coens had gone all the way and turned this film into the pitch-black comedy about two utterly despicable people who thoroughly deserve each other which it occasionally seems to want to be, it might have been up there with their best. As it is, it feels as though the studio ordered them to tone it down so that it could be marketed as a feel-good rom-com, and all the best bits ended up in the waste paper basket. By the way, at no point does any "intolerable cruelty" in the legal sense actually occur. Maybe it was an appropriate title for the first draft, and they simply forgot to change it?