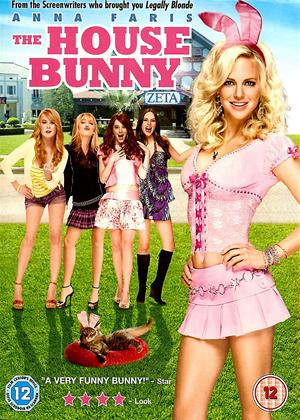 Synopsis:
When the mansion's favorite bunny, Shelley (Anna Faris), is kicked out of the hottest house in town, she gets lost in the wilderness of Beverly Hills. But when she stumbles into the sorriest sorority, Zeta Alpha Zeta, she finds a home where she can finally put her talents to good use. Then when Shelley meets a beau she'd like to tie on for good, she really has something to flirt for and thinks she might have a chance at life on the outside. Now the race is on to make over the girls and make Zeta the hottest house before the University shuts them down. Move in with The House Bunny and laugh your tail off!
Actors:
Anna Faris, Colin Hanks, Emma Stone, Kat Dennings, Hugh M. Hefner, Christopher McDonald, Beverly D'Angelo, Katharine McPhee, Rumer Willis, Kiely Williams, Dana Goodman, Kimberly Makkouk, Monet Mazur, Tyson Ritter, Sarah Wright, Rachel Specter, Owen Benjamin, Holly Madison, Bridget Marquardt, Kendra Wilkinson
Directors:
Fred Wolf
Writers:
Karen McCullah, Kirsten Smith
Studio:
Sony
Genres:
Comedy, Romance

Reviews (3) of The House Bunny

At first I wasn't too keen about watching this film, I thought it was going to be boring, but it wasn't.

It's an easy to watch film that's light hearted and fun.

It's never going to win an oscar but in my opinion it's not a bad way to spend a free 97 minutes.

My partner enjoyed it too, although I think most men would as there is plenty of flesh on show, unsurprisingly!

Anna Faris is always funny and certainly doesn't disappoint in this film. She makes you genuinely feel sorry for her, but like in most light hearted films, she comes good in the end.

Even Heff and the girls come across well. The rest of the cast are all good too.

I laughed all throughout the film, and would definitely recommend to both men and women.

Silence of the Bunnies - The House Bunny review by CP Customer

House Bunny is a tasteless experience. A twenty-something aspires and becomes a member of the Playboy household. It's all done in a clean cut way with plenty of scantly clad females, without ever showing the true issue of pornography. Anna Faris plays the blonde bimbo with relish and clearly deserves better. The film could have dealt with how females are meant to conform to male stereotypes and its better to follow your own heart's desire. Instead a group of unfashionable college girls are whisked into wag form, dispensing with any personalities and brains. Entirely predictable, House Bunny does have a few laughs and a good soundtrack but you cannot avoid the sour taste it leaves.

Or the death of feminism. Playmate gets kicked out of Hefner's mansion for being too old. She moves into a University sorority house occupied only by plain looking girls and teaches them how to be babes. A Pygmalion for the end of civilisation. It seems a little harsh to be cruel to a film that Anna Faris dieted so hard for, but really, her fab waistline is this film's only saving grace.