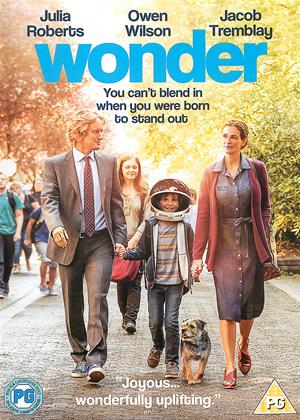 This is a rather superficial look at what is a really difficult problem. Children are, until they learn differently, unkind and natural bullies. And they have in spades that unfortunate human inclination to distrust and dislike anyone who is not like them. Strangers, foreigners, the disabled - it's all one to children: they're different. The book/film attempt to show that they can be won round by patience and perseverance, and the story is well told, with very good child actors and an almost unrecognisable Julia Roberts.

Although I can in all honesty give it only 3 stars, I did enjoy it and can recommend it to you.

My wife and I had to fast forward chunks of this to avoid the danger of getting diabetes as a consequence of too much sickly sweet goo. intake. The premise was very noble - disfigured kid struggles heroically against bullying on starting school - but this was a paint by numbers narrative in which no turmoil was to big to overcome and life turned out ok in the end. I'm sure there's a time and a place for this, but I felt compelled to follow it up with the horror film 'Hereditary' just to cleanse my palate.

The film sort of follows a predictable path, apart from when it took in the point of views of other characters, which wasn't expecting. Some of it was a little bit cheesy, but also very moving and mostly good acting.

On paper, I couldn't see Owen Wilson and Julia Roberts working - especially given the premise of the film. But happy to report that from my families perspective, we all enjoyed it. Film is a slow burn for sure but works on all levels. I found the scenes that focussed on a particular character a little off-putting but they did work. Don't expect too much and you'll enjoy it. This is definitely not melancholic or heart wrenching and all the better for it.

Lot of anguish. Sort of kids film wandering into agony aunt areas. Makes a point and has good messages, but is just so plastic as to be recyclable.

Liked this - Wonder review by CS

Found this movie quite heart rendering and enjoyed it. Good performances from all lead actors and good storyline.

Although it is a story about physical disability I think it applies to every disability.

This really is a wonderful heartwarming film which for some will act as a reminder and for others a lesson in what we should be as human beings.

All of the leading characters put in superb performances and right from the off I felt an instant emotional connection with the main character ‘Auggie’ and the loneliness, nervousness and worry of not just a young child but a young child with a beautiful difference.

Yes it’s gooey in places and it made me smile and cry throughout but that’s because it’s such a beautiful and touching film.

The film is also given an added depth with the characters that surround Auggies life, presenting their own lives in cleverly woven in segments.

Humans can be judgmental and nasty but they can also be kind, warm and loving. Never judge a book by its cover and never accept bullying as it’s such a destructive force.

This film lit up my soul and reminded me how much love and acceptance we can bring to each other and the world.

predictable outcome but the excellent acting, especially from the kids, was amazing in itself. A great production of a difficult subject which still manages to be enjoyable without being too heart wrenching!

Much Better Than Expected - Wonder review by SS

I did not find this film to be superficial as the other reviewer states. It certainly was not a profound excoriation of the subject; birth defects and facial disfigurement, though it delivered more than most emotionally loaded, American, tear-jerkers. The lead actor was absolutely outstanding and hugely impressive as the afflicted young boy. The narrative is told, with emphasis upon the differing points of view, within the family and this is an effective device, evoking our sympathies and understanding, moving away from the black and white linearity of other such movies. All of the cast are very good indeed, which includes Julia Roberts and Owen Wilson. It is a heartwarming, memorable film. Well worth the viewing.

There’s a satisfying saccharine nature to the warmth of Wonder. It’s a touchingly simple and yet effective tale of growing up different and inspiring confidence. Sure, it piles on the emotional sweetness of one little boy trying to fit into a word that may not accept him, almost by the numbers with emotional beats. But I’ll be damned if it doesn’t work, maybe not at bringing the tears but certainly doing its best weave a sugary smile of good vibes. Sometimes you’re just in the mood for something simply sweet on the heartstrings.

The story centers around the little boy Auggie Pullman (Jacob Tremblay), born with problems that led to several problems and an odd looking face. His supportive family of his mother Isabel (Julia Roberts) and his father Nate (Owen Wilson) keep him comfy and sure of himself by homeschooling him, playing with him, and letting him seek sanctuary within a space helmet. He enjoys all the same things most kids enjoy; Minecraft, Star Wars, Halloween. But when he finally attends public school, it won’t be an easy transition.

With such a nice and easy plot, you can most likely pinpoint where all this is going. There will be a bully who makes fun of Auggie that will find himself regretting his actions later on. There will be the one boy who takes a liking to Auggie, only to betray him around his friends and realize how much of a jerk move that was. And mom will naturally be at a loss for words when she is stricken with the emotional moment of her son asking if a friend can come over to play.

This is all territory quite familiar that it’s almost a throwback of sorts to the simpler time of light and gentle heartwarming family tales from the 1990s. Still, there’s a few unique angles here and there that doesn’t make it so one note. Auggie’s older sister Via (Izabela Vidovic) feels rejected and alone when Auggie’s condition hogs the spotlight, forcing her to jump for the literal spotlight of getting into drama club. There’s another girl who is closer to Auggie, Summer (Millie Davis), but she feels an odd distance as the boy grows up and comes into his home. I also appreciated how the bully Julian (Bryce Gheisar) is very well-rounded where the distaste of Auggie mostly comes from his parents that photoshop the weird looking kid out of the class photos and argue that society shouldn’t have to bend to avoid hurting feelings.

Director Stephen Chbosky certainly puts in a little extra effort to make us feel more for Auggie, even if the beats come with writing most standard that borders on Afterschool Special territory. One charming visual addition is Auggie’s imagination of astronauts and Star Wars that follows him to school, where Chewbacca can open a door for you and Darth Sidious can comment on how cold a put-down can be. There’s a remarkable commitment to little details of youth, from Auggie’s accurate Minecraft server to the authentic nature of that Chewy costume. It’s these little aspects that make the loose and playful nature of Wonder more inviting than phoned in.

Wonder doesn’t exactly redefine the genre of feel-good stories about a family coming together despite physical differences and emotional distances but there’s a lovable aspect all the same. It’s that diet bit of drama where you just want to curl up and feel good that the world is filled with caring people that can mostly work through their differences and have a good time. And thanks to some tactful decisions in the writing and direction, I had a good time as well, even if not entirely fulfilled emotionally.