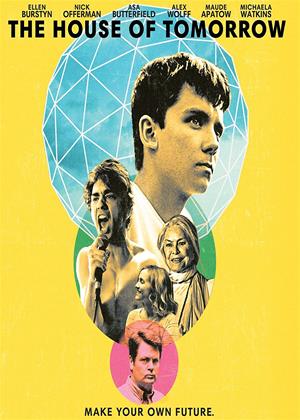 Not released
Somebody Up There Likes Me

Reviews of The House of Tomorrow

The House of Tomorrow review by Mark McPherson - Cinema Paradiso

House of Tomorrow is another fish-out-of-water, bubble-boy story of one kid who has led a sheltered now finds the discovery of what most teenagers adore. I’ve been here dozen of times and so I come to the realization what makes these stories better than worse. What it ultimately comes down to is how much I enjoy the characters and how little reliance there is on the very concept of a teenager acting like he’s never seen a guitar before. This movie thankfully favors more of the human aspects than the triangular windowed dome in which the protagonists resides with his mother of an aged new-age widow.

Asa Butterfield finds himself once again in the role of a boy confined to a specific living space, a typecasted role I hope he can eventually escape. His grandfather was a great visionary of the future with his idea for a more sustainable and unique home. Having passed on, his grandfather has left the home to Asa and his grandmother played by Ellen Burstyn. She does her best to raise him right by rejecting modern methods of food and music, choosing to homeschool him in an environment of art most experimental, studies most rigorous, and music most calming. But she can’t keep him there forever, especially when a Christian tour group stirs up all sorts of curiosities about girls and punk rock.

For the punk rock angle, Alex Wolff plays the rebellious rocker who can teach the homeschooled kid a thing or two. They share a lot in common, as Wolff’s character had surgery that has left him in a state of requiring medication he regrets taking. His dad is also too coddling, played by Nick Offerman, hoping Christian youth groups can help his son make friends. He’s naturally very awkward and delicate when it comes to pushing Asa and Alex together. Maybe they teach each other a little something.

Yes, yes, these are all familiar story aspects and it could easily run away with humor most quirky but everything feels strangely balanced. There will be a moment when Ellen Burstyn is dismayed that her son is eating sandwiches with white bread as opposed to the more organic type. Alex will at one point miss his medications and there’ll be a trip to the emergency room to put things in perspective if it gets too silly. A rock performance is inevitable as Asa and Alex work on their band, perfecting everything from the songs they will sing to their very name of the band. And is it even a spoiler to note that all parties will come together, in the end, to better understand one another?

All of that being said, there’s a simple and gentler tone, common as it may be, that worked its light magic on me as the film progressed. No major surprises but not many disappointments either. I appreciated how the history of the future house was kept relegated to small bits of lectures and documented footage so that it never dominates the film. Though Alex must have a condition that cripples him, Asa doesn’t come with the added baggage of having a disease that prevents him from going outside, which he very well could have given the house he occupies. A passive film that delivers exactly what it promises, if nothing else.