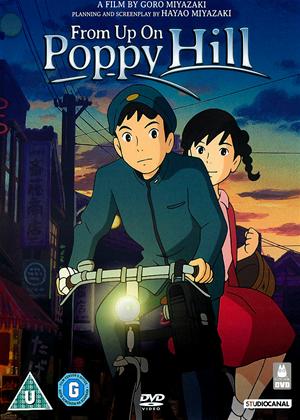 Rent other films like From Up on Poppy Hill

Reviews of From Up on Poppy Hill

If there is a bad Studio Ghibli film out there, I haven’t seen it yet with last years Arietty being a delightful romp into the realm of the borrowers. From Up On Poppy Hill plays like a more conventional romance tale but with its heartwarming story and 60s setting it really shines.

The story follows Umi, a teenage girl whose father died in the Korean war who has to manage a boarding house while her mother is away abroad. While at school she meets Shun, the academy’s resident political activist and is drawn into his latest campaign, to stop the destruction of the school clubhouse for improvements before the 1964 Olympics.

Delightfully animated with bright warm colours and gorgeous landscapes, it’s a marvel to look at and appreciate even before you get to the film itself. Ghibli films always seem simplistic in their visual design but their attention to detail is to be envied.

However the film takes some odd detours on this adventure with a side story ripped straight out of the script of Say It Isn’t So. Too melodramatic to even mention. It’s relevance proves a mere plot contrivance to prolong the film to its far more satisfying ending. It doesn’t prove an immovable obstacle but it degrades the rest of the films subtle tale of family and obligation.

With plenty of history crammed into the films limited runtime it gives the film an authenticity to its story, a love story to embrace the newly found peace and the Olympic games planned to lift the country back up.

Perfectly realized but with a few story issues, Ghibli’s latest is a perfectly respectable follow up and a proud penultimate feature for Hayao Miyazaki. Full of quirky characters and well scripted dialogue, From Up On Poppy Hill is a terrific place to be if you ever get a chance.