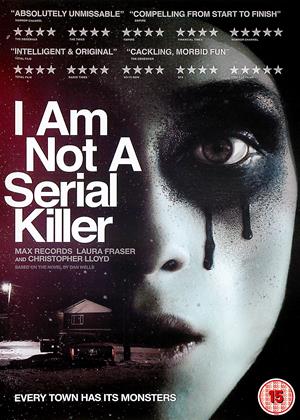 Rent other films like I Am Not a Serial Killer

Reviews (3) of I Am Not a Serial Killer

Wow, ....a very slow moving movie that ends in a place I really wasnt expecting at all !

Starts pretty ordinary with a slightly twisted Teen showing all the triggers of a fledgling serial killer under therapy.....

...BUT where it heads is down a road you wouldnt imagine in your wildest dreams.

Well worth more than one watch if you can bare to sit through the slightly slow first half again.....

Lo-key small-town thriller in which Max Records plays a teenager with sociopathic tendencies who stalks ageing serial killer Christopher Lloyd. The tone is one of black humour, which detracts from any excitement or thrills. Over-praised in the press, it’s an affable time-passer but no more.

New career in a new town - mild spoilers follow ... - I Am Not a Serial Killer review by NP

This is a terrific story involving a supernatural killer in a small Midwestern town. The question is - who is the killer? After a couple of very effective red herrings, the truth is revealed. Up until that point, there was no hint of anything non-human, and when the alien nature is initially revealed, it is so quick, you may have to replay the moment to be sure exactly what you have seen.

That covered, this is a very slow-paced feature. The long sequences in between effective set-pieces tend to drag and attention wanders. The close-knit community, often covered in a punishing blanket of snow, lends a very familial sense of isolation to proceedings, but even that isn't enough to stop the attention wandering from time to time. The finale then goes very much in the opposite direction, with some very effective scares.

Among the possible killers are young John Wayne Cleaver, and septuagenarian Bill Crowley, both brilliantly played by Max Records and Christopher Lloyd respectively. These main players head an excellent cast who make their characters believable and appealing despite their very real flaws. My score is 7 out of 10.

I Am Not a Serial Killer is fresh, entertaining, whilst also managing to be a deliberately slowly-paced film. This serves two purposes for the film, it builds up necessary tension (without this tension, the payoff would’ve probably faltered), and it provides an excellent tonal shift for the second half to pick up where the first one left. In fact, I Am Not a Serial Killer is a well-made cinematic experience that’s worth sticking with it until its very end (where all hell breaks loose). When I come to think of it, I Am Not a Serial Killer may very-well be the most original thriller in the last decade or so full stop. Now onto the review.

The film is directed by Billy O'Brien and penned by both O'Brien and Christopher Hyde. It’s set in a semi-rural town in the Minnesotan Midwest, where a series of gruesome murder shake the already paranoid community to their cores. Now the residents are terrified, and their only hope lies in an unlikely anti-hero, the high-school misfit going by the name of John Wayne Cleaver (played by Max Records). This teenager has a strange obsession with serial killers which is oddly apparent via his, unfortunate bully-friendly, name. And so, the vicissitudes begin and next thing you know, Cleaver is investigating both a senile and charming old man named Mr. Crowley (played by none other than acting legend Christopher Lloyd). Saying more would inevitably lead to spoilers, so I would rather keep my mouth tightly shut.

In regards to atmosphere, I Am Not a Serial Killer knocks it right out of the ballpark; the film carries that eerily feeling that something in the town is deeply wrong, a feeling from which stems an anticipatory tension that ends up – you guessed it – with a twist. Despite all of that being said though, this offering does not rely on the ol’ switcheroo, but it rather bothers enough to explore the different motivations behind each major character and how they’ll go about it; in the end, I Am Not a Serial Killer is a film of characters and it this light, it does its job almost flawlessly. Despite all of that however, it is not without its fair share of flaws.

Which are mostly found in the editing, some of the musical choices that were made, and the unnecessary introduction of some computer generated imagery that felt like being out of place.

Overall however, I Am Not a Serial Killer is a film that would make you cringe, gag, flex, and recoil away in terror all at once. Or none at all, depending on your mood and personal preference. Either way, one thing is for certain: Billy O'Brien’s piece would not leave you indifferent in the least.