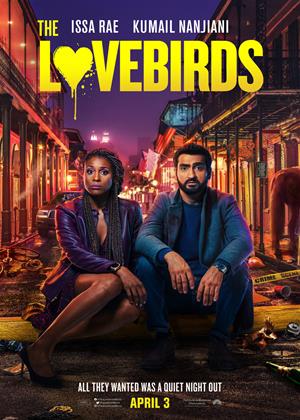 Not released
The Dirt

Not released
Hello, My Name Is Doris

Reviews of The Lovebirds

Kumail once more ventures into the one-wild-night buddy formula of silly and slapstick he took on in 2019’s Stuber with another film that has giving gags, taking blows, and dashing across the city. At least within this familiar formula, there’s a bit of an edge of posing at as a romantic comedy ala Date Night (as if anyone remembers that picture). And while it’s hard to deny there’s some genuine chemistry to the back forth of Issa Rae and Kumail Nanjiani, they’re trying to make lemonade out of this dusty premise.

Issa and Kumail play a couple who have been together for quite some time and have reached a boiling point, where their arguments over reality television have started to take a more aggressive tone. On their way to a party, they realize things are not going to work out between them and that their coupling is doomed to a breakup. That is until their car hits a bicyclist in the city. Someone takes control of their vehicle, presumably a cop, to chase the biker down. Issa and Kumail believe their in some exciting police chase but soon discover they’ve just become involved in a murder. Unsure of how to proceed now that they’re wanted criminals, they rush about the city’s underworld trying to find a way to crack the murder and clear their names.

Being a couple of color, most of their laughs come from being unable to trust anyone. After fleeing the scene, they question their next move and Kumail opts for the simplistic explanation of coming clean to the cops. Issa stresses they’re more likely to not only accuse them but beat them down as well. They later freeze when a passing cop car eyeballs them uncomfortably and are relieved it’s only the regular kind of racism from the police. They’ll later stumble onto some unwitting white frat boys and make a slew of the expected goofs on white boy culture.

I want to mention how these scenes are not offensive for their biting of the pervading racism but are built as softballs for easy comedy. It becomes clear as the film goes on that Issa and Kumail are not just expected to solve a murder but save this picture with its routine of the ridiculous. Some scenes just continue on and on where you can tell a lot of improv was filmed to make this scene even mildly funny. This is most evident during their scene at a diner. Watch the table during their back and forth. Issa is drinking a milkshake while stressing they can’t go to the cops. Cut to Kumail with a plate of food. Cut to Issa who now has replaced her milkshake with a plate. Cut back to Kumail and now cut back to Issa who has the milkshake back but it’s less now. This isn’t glaring because it’s a continuity error but because it suggests there were many takes diced up and possibly even a whole other conversation filmed in this scene that stammered to find the funny.

The more elaborate scenes feel so tightly assembled they lack the surprise for the unexpected laugh. Consider the scene where Issa and Kumail are being tortured by a couple. Kumail is given the torture located behind a door, which is opened to reveal the backside of a horse. Based on the staging of the scene and his positioning to the horse, it doesn’t take a genius that the funniest bit to be had with this scene is that Kumail will be kicked by the horse and fly back on his back. Later, Issa and Kumail will infiltrate a secret organization of masked aristocrats having creepy orgies in a theater. You can see it coming from a mile away with the obvious reference to Eyes Wide Shut, even if Issa attempts to throw it off course by referencing The Handmaid’s Tale.

The Lovebirds is more admirable for talent assembled than the loose script they are given. Unlike the previous picture by Kumail and director Michael Showalter of The Big Sick, there’s little heart and much too manic within this picture to be anything more than fruitless fluff. It has some smile-worthy moments here and there and I love the dynamic between the duo on their by-the-numbers adventure. But they’ll need more than just some funny slapstick and stammer zingers to save this picture from being anything more than a mindless divergence that prattles on longer than it should.