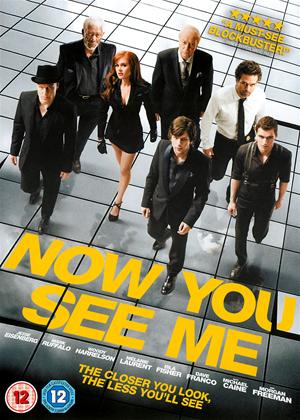 Now you see me. - Now You See Me review by AR

It's an entertaining romp, nothing that hasn't been done better in "The Prestige" but a serviceable few hours. There is a twist at the end that surprised me and l think the film does hold your attention long enough to want to find out it's secrets.

Ok, nothing special but you could do worse for an evening viewing.

This movie does keep you watching until its end, but for 'serious plot' movie goers, this is not one for you. It's far fetched nonsense which does enough to keep those watching entertained, but lacks an element through out - a decent story line.

Bottom line - if special effects is your thing, the magic tricks will be for you, if you like chase scenes there's a bit for you, but if you are expecting a movie to the standard of Ocean's Eleven - you will be expecting to much.

Waste of time - Now You See Me review by CP Customer

I genuinely feel robbed having watched this film. It can only be summed up as nonsense.

I am quite able to suspend disbelief, but this film is just insulting in its arrogance and constant stupidity. It is a sheer exercise in massaging egos. The cast are beyond irritating and the twists intended to shock are neither shocking nor clever. The main twists at the end can been seen coming a mile off.

This film can be simply summed up in one statement: WTF?!

Did I like it - Now You See Me review by JL

Bad magic. - Now You See Me review by Steve

Caper film about a heist carried out by street magicians is exciting until, typical of illusion, it all falls apart when the trick is explained, upon which it becomes a frustratingly idiotic anticlimax. Maybe worthwhile for the ride, but be prepared to be hugely disappointed.

Superb acting - Now You See Me review by JD

The other reviewers have slammed this on the basis the the plot is full of holes and the story line is slow and wonky. Sure, but the characters are great, well acted and entertaining. I was fully immersed into the fate of the 4 magicians and Ruffalo is of course likeable and interesting. Magic is so easy to do on film that maybe we have seen it done better, but it is still thrilling. 1 hour 50 minutes well spent.

Little wagon for Michael and Morgan to grab some funds. At least not another Marvel comic extravaganza. Is OK and rolls along, but not a rivet.

Hated it - Now You See Me review by LL

You watch with anticipation hoping there will be a twist that makes this flashy yet somehow incredibly dull film worth watching .... it isn't

Meh - Now You See Me review by SM

My colleague James and I regularly discuss movies and TV series we are watching at the moment or have already watched and when I told him I had this Blu Ray at home and was about to watch it tonight he said that he had already seen it and it was 'meh'. I was confused as we are both normally quite descriptive/constructive/critical about the things we watch.

After watching it tonight I realised James actually got things spot on. The visuals are really good but you are just not drawn to the story and I found myself answering emails and net surfing during the movie. So if you have people round, yes have it on in the background but if you fancy settling down and watching a movie then 'meh'.

Now You See Me review by Alyse Garner - Cinema Paradiso

With a plot that can only really be described as audacious Now You See Me is an intriguing, complex, action packed and fast paced thriller with a fantastic cast and unusual story. My only qualm that the premise of the story is so imaginative that it becomes almost a little too far fetched to be believed.

With an opening scene that sets up the characters known as the Four Horsemen, a trope of illusionists who rob banks whilst on stage, then funnelling the stolen profits in the bank accounts of their audience members, the film grabs you immediately – how these people achieve this complex illusion is baffling, yet what is more intriguing is the characters involved in the heist. With the appearance of two older gentlemen, Morgan Freeman and Michael Caine, with an unknown prior relationship (not Batman of course) and the determination of a distraught FBI agent to catch the magicians the film is full to bursting with illicit connections, dubious relationships and strange coincidences all of which contribute to the many stranded web that makes up this thriller.

The classy style with which the writers and directors disperse clues and red herrings throughout the plot is reminiscent of the most accomplished sleight of hand trick, by the time you realise you have been fooled it is far too late and you find yourself running to catch the next clue as it falls. The pace is bang on however and although you spend a great deal of the film asking questions there are only a few in the audience who are likely to feel truly left behind, the film intends to confuse you, the beauty of its trickery in how it distracts characters and audiences alike whilst secretly robbing them blind.

The performances are all excellent; Mark Ruffalo is perfect as the harassed FBI agent, whilst Freeman and Caine create intense intrigue and suspicion. The stars behind the Four Horsemen, Jesse Eisenberg, Woody Harrelson, Isla Fisher and Dave Franco are fantastic; their intellect and the way in which they run rings around the authorities is both awe inspiring and comedic gold. Provided one is prepared to suspend all belief and feels quick enough to notice the minutia hidden within the plot then I think you’ll really enjoy Now You See Me, for the more serious and stoic among us however you may find it all a little too over the top for your liking.