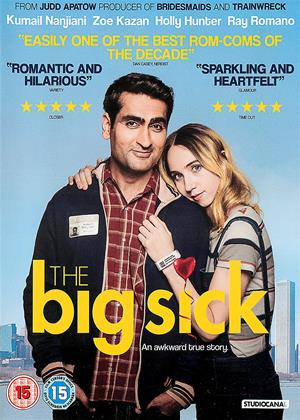 Reviews (6) of The Big Sick

A beautiful movie. Funny, sad, based on a true story and very well acted.

Interesting to follow the life of an American muslin who meets and falls for a white girl, who suddenly suffers a major trauma.

Have the hankies ready, but be prepared to laugh a lot too at the witty script.

Watch without prejudice . A superb film.

Nanjiani is great, but the girlfriend is very irritating. - The Big Sick review by JR

Kumail Nanjiani is fantastic - his humour is so low key and dry. The girlfriend's parents are engaging, feisty and funny too. But the girlfriend is one of those "quirky, kooky" young female characters so beloved by male American film makers - for quirky and kooky, read annoying and unbelievable for example, she wakes up and demands to go to a coffee shop in the middle of the night because she is too embarrassed to use the toilet in the boyfriend's flat. The film benefited from her absence in the second half, and Nanjiani, his parents and her parents could get into top comedy gear.

A stand up comedian of Pakistani descent meets white girl. His parents very anti. A moving tale which appears to be based on actual events. A bit weird in places but engaging nonetheless. Worth seeing, fine performances, not least from the male subject himself! The female character (bed ridden for half the film) is a Woody Allen cookie character we would all like to date.

This film is unusual in the fact that it's a real life tale of how Pakistani standup comedian meets & falls in love with a white American girl. It could have been played strictly for laughs (which to be honest was the main reason I rented it) But what the film actually explores is the male character's cowardice in revealing what he truly wants - whether it's to his pushy parents who are trying to force him into an arrange marriage, or to his soon-to-be ex-girlfriend about his true feelings for her.

The cast are superb - particularly her parents - and all the characters feel that they are real people with individual foibles & quirks, who you grow to care about over the course of the film.

A perfect date night movie - just remember a box of tissues alongside your box of popcorn.

This is a sweet movie ( that sounds insipid but it is not) & I am glad to have seen it. I like that is based on a true story. The script was written by Kumail & his wife Emily. Kumail plays himself in the film. Kumail, Emily, the director & several of the other actors met while doing stand up comedy. I liked seeing a Muslim family from Pakistan. They are not terrotists, victims or survivors. They are just a family. Good seeing the extra features also.

What’s not to like - The Big Sick review by KN

Faultless comedy.Funny,emotional,realistic characterisations. Above all likeable, superbly acted. You’re not quite sure how it will turn out which is always a good sign as nothing is ever straightforward in real life.