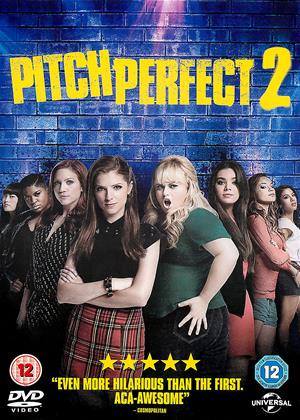 There is no reason why the acapella sports-esque picture Pitch Perfect should warrant a sequel outside of the obvious financial gain. Pitch Perfect 2 features no developed arc, no expanded world to the singing competition and no new gags that do not echo the original. While never really toppling its predecessor as a sleeper hit, it at least maintains the charm for a film that plays more like a victory encore than a satisfactory continuation.

The Bellas are back once again, singing their hearts out at more acapella competitions and never attending college classes which seem to be non-existent at their school. But when Bella member Fat Amy (Rebel Wilson) experiences a shocking wardrobe malfunction during their performance, the group is kicked out of competing. The only way back in is, of course, more acapella competitions. Shifting to the international level, their new competition is (what else) an evil group of serious Germans, dressed in black and with laser-focus on their song and dance numbers. But, naturally, the Bellas don't go head to head before they skirmish with underground singing groups and have the obligatory montage of training and self-discovery.

With such a frantic pace of doling out acapella numbers and absurd dialogue, this script has little time to develop any of its characters. Beca (Anna Kendrick) sneaks off to her internship at a record company, but still requires much more confidence in her talented voice. Fat Amy begins to form a romance with a fellow acapella singer, but it’s mostly played up for jokes as opposed to any real character (can’t have that with wild cards I guess). And that’s about as far as the character development goes for this musical ensemble. The familiars are all present including the obese lesbian (Ester Dean), the cooky asian (Hana Mae Lee) and the two vicious announcers (Elizabeth Banks and John Michael Higgins) that savage the plucky girls (“You’ll all just be pregnant soon anyway.”). But if you’re expecting any of them to receive any extra depth or attention that wasn’t in the first film you are in for one massive disappointment.

There are some new characters brought into the mix, but add very little. Emily (Hailee Steinfeld) is the new Bella member with a great voice, but she’s more of a vessel for expanding the history of the group that relates to her mother (Katey Sagal). David Cross plays an obsessed acapella fan and judge, but it’s mostly just David Cross doing David Cross for a short time. And Keegan-Michael Key plays up Beca’s boss with his trademark displays of comical frustration. There are no major surprises from any of them - doing exactly what you’d expect for just about any guest role they’ve been signed on for.

The only area where it feels some originality was applied to this film is in the acapella numbers. Whether elaborately staged to absurdity or spinning out of control like a trainwreck, they certainly draw the eyes and the ears. The biggest issue with the format is addressed as Beca attempts to infuse an original song into the mix (a faux pas of the acapella community). The judges and commentators frown on such an inclusion almost as much as Amy’s nudity, but Beca seems determined to break the rules and ascend the Bella’s to another level. It’s a showy final number that perfectly plays up the talent and camp of the whole presentation. The Bellas transcend the very name of acapella to a new realm: original songs.

Pitch Perfect 2 should be titled Pitch Perfect Redux. It’s a second helping of what made the original so noteworthy, but never breaks free of the old to stand well enough on its own. Rather ironic the way this sequel mimics the acapella style of singing over songs as covers. Likewise, this sequel treads on similar notes, but fails to put much of a spin on its predecessor. It’s not a terrible song given its devotion to preservation. But why dip into a cover if the original is so much more memorable? Perhaps there’s some subtle commentary about the nature of acapella within its conception. Is the film that deep? A fleeting thought before Fat Amy comically stumbles down the stairs.