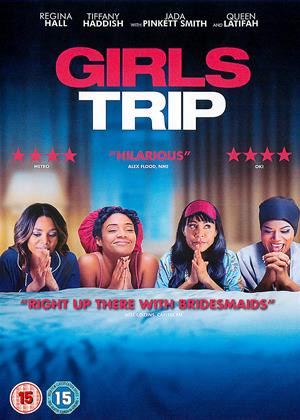 Only if you have time on your hands. - Girls Trip review by AA

I was surprised Jada Pinkett-Smith in a script this bad. Like seriously. Plus her casting was not age appropriate, just saying. And it showed. It really showed.

Tiffany Haddish was great and talented but could not compensated for a bad script. It felt like a huge commercial for the Essence Festival plus a predictable story line. I was expecting more a road trip with plenty of drama. Yes, there is some drama, a few shock toilet comedy moments, GREAT DANCING but not sure. Just glad I didn't see it in the cinema, it wasn't worth it. So borrow it, if you have the time or are curious.

A female 'gross out' movie - Girls Trip review by IB

I wasn't expecting to enjoy this and I don't really want to give it four stars but I had some real laugh out moments when watching this.

Not the sort of movie you watch with granny but if you enjoyed Road Trip or anything similar you should enjoy this.

Disappointing but redeems itself - Girls Trip review by HK

remove four really unpleasant words and you have about half an hour of good script.

Disappointing because there are some really funny moments and a great ending.

Given the extremely talented actresses and other gifted artists in this film, it really let them all down.

If this is the best Hollywood can offer black female talent then shame shame shame.

I love these ladies and they deserve better than this - worth watching for the last 20 minutes and to put some face time in films for black women.

Loved it watch it as a film lover and not a film critic.

So so funny not laughed so much at a film in years.

Sure acting could be better script not fantastic but so funny rolling on the floor funny.

My daughter had seen this at the cinema and recommended it. Well I can usually find something of interest in even the worst film BUT not in this one. All of the characters are awful and, most disappointingly, there is no chemistry between the main characters...none at all. My daughter also agreed that second time out, this was really bad. So 1 star as it's a film....but you might just like it but only the first time through...

Blatantly Racist, Sexist and Not Funny at all! - Girls Trip review by CS

Having watched this film, it’s easy to see where the prevalent racism emanating from within the Black American community appears to come from! When you produce a film, that appears to intentionally remove actors of other skin colours or racial heritage and replaces almost the entire cast with solely black people, one has to question why the producers would go to so much effort? There are literally four white actors in this film, the Agent, the Boss, an Air Hostess and a Client, all of whom appear to have literally less than a minute on screen each in total! In addition there is one person of presumably of Indian extraction, who has less than roughly 30 seconds screen time! So in essence all the non-black actors have been reduced to bit parts, walk on walk on off rolls, which is severely demeaning and appears to be almost borderline racism in itself! Also why is it deemed acceptable for black people to constantly use the ‘N’ word all the time? As a person of mixed ethnic heritage I find it insulating whoever uses it and worse when black people do so! Copious use of both the ‘N’ word and ‘B***h’ are made throughout! The action moves to Mardi Gras in New Orleans, an event which is well know for it’s multi-cultural approach and popular with visitors from all over the world. However again it’s blatantly noticeable that over 98% of the people in the background are all black! How one can film at such an event and remove all the Latinos, Hispanics, East Asians, Europeans and white Americans who regularly visit this event, is beyond comprehension, but the producers appear to have managed this amazing feat and again one has to ask why? Looking for a non-black person in the crowds is like playing, ‘where’s Waldo’! I cannot even contemplate a white or non-black film maker or anyone of any other skin colour, appearing to intentionally exclude others solely based upon their skin colour, it’s just unthinkable in this day and age. So I seriously question why the producers of this film appear to have decided make the cast over 98% black, it’s just beyond comprehension! I gather this is supposed to be a comedy, but I found nothing funny about it at all! I realise that this film is probably made for and aimed more at a Black American audience, just like a Bollywood movie made for an Indian/Pakistani audience, but such a film probably would never be made in Europe as it would be deemed too racist and discriminatory. For me this is a Chick Flick aimed at the Black market, which sadly has very strong Feminist and Racist undertones!