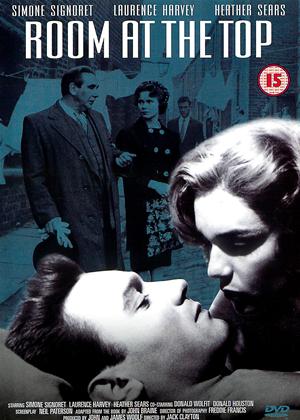 Reviews (3) of Room at the Top

A superb 'angry young man' film from 1959. Set in a 1940s post-war Yorkshire town, Joe Lampton (played by Laurence Harvey) takes an accounting job working for the local Council. An orphan from a working class background, he wants to move upwards in the local society and sets his sights on Susan Brown, the daughter of a powerful local businessman. He joins the local amateur dramatic society and has an affair with Alice, an older woman played superbly by Simone Signoret. Although patronised by Susan's boyfriend and family, Joe succeeds by getting Susan pregnant and marrying into money. But his love lies with Alice – who dies in a car accident after drowning her sorrows on news of Joe's forthcoming marriage, leaving Joe with a deep sense of guilt which lasts past his wedding day.

The star of the film is without doubt Simone Signoret who won a 'Best Actress' Oscar for her performance. The film also picked up the BAFTA for Best Film and another Oscar for best screenplay.

Laurence Harvey is an actor who I can't usually stand. Having said that, he really is right for the role of Joe Lampton who is not only a social climber but a 'user' of others, a bit of a coward, and altogether a not very nice chap. Apart from the somewhat dodgy Yorkshire accent (despite his English sounding name, he was Lithuanian via South Africa) his role is well played.

There's plenty of period detail (much smoking, every man wearing a suit to work and in the pub, boys in short trousers, cobbled streets etc).

By today's film-making standards the film is perhaps a bit 'stagey' but it really is excellent. Highly recommended – 4/5 stars.

New Wave Realism. - Room at the Top review by Steve

This groundbreaking work of social realism is Jack Clayton's masterpiece, and the film that broke British cinema's prohibition on sex. Room at the Top is set just after the war, in a time of austerity. Working class Joe Lampton seeks wealth, not by raising his own class, but by getting a rich girl pregnant and marrying into the upper class.

How revolutionary this film was in the late fifties is indicated by how difficult it was to cast. There was no one ready to act the leads. Joe Lampton was played badly by the inflexible Lithuanian born actor Laurence Harvey. And to portray the married older lover, Alice Aisgill, French legend Simone Signoret was brought in.

Her burning, consuming performance as the damaged other woman to Heather Sears' virginal rich girl, was completely new. We don't lose sight of her being a mature woman well on the journey into middle age and for whom love and life has mainly brought disappointment, sexually, emotionally and socially. And yet, her sensuality, and her unreachable loneliness makes her tremendously sympathetic. And her eventual destruction so painful. It's hard to believe that any of the Rank school of leading ladies could have produced anything comparable.

This is one of the most affecting performances in any British film in any era. As ever in UK films in this period, the supporting cast is excellent with Hermione Baddeley memorable in one short, but overwhelming scene.

Is there room at the top? - Room at the Top review by RhysH

Sometime in the fifties John Braine in hospital being treated for tuberculosis gave birth to his novel "Room At The Top" and at its publication in 1957 Braine was placed in that very loose grouping of "angry young men".

This film made in 1959 is an accurate rendition of the novel. Although the novel was set just after the second world war the film is placed firmly in the 1950s. The clothes, the cars, even the office furniture are fascinatingly evocative of the time.

The look may have changed considerably but have attitudes? Wealth breeds wealth, success is achieved by the exploitation of others. Men gawp at women lustfully provided they conform to certain stereotypes. Joe Lampton (Laurence Harvey) has a degrading grading system.

Harvey's performance is spot on, you can see the avarice in his face in the opening shots on the train. The film belongs, however, to Oscar winning Simone Signoret, she doesn't conform to the stereotype, her beauty comes from within and the way she portrays Alice's love for Joe is movingly sincere.

Most of the other performances are caricature , the boozy mates, the self made man of brass, the upper class twits. Some actors don't get a mention on the cast list. It's good to spot Richard Caldicot, Wendy Craig, Miriam Karlin, Wilfrid Lawson and Prunella Scales