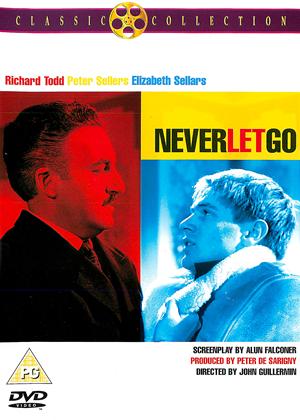 We usually think of Peter Sellers as a comedian and a comic actor - but here he's cast against type as a rather nasty villain.

This film is a great find and deserves to be better known. In its day it was X-rated (over 16s only) and deservedly so; perhaps by today's standards the violence and sexual innuendo is relatively tame but it's still a gritty film.

The story goes something like this: cosmetic salesman (Richard Todd) has his new car stolen, needs it to do his job but only has 3rd party insurance, tries to track it down himself and crosses swords with dodgy garage owner (Peter Sellers), is beaten up but gets his car back in the end. It doesn't sound much but the period detail and acting are excellent throughout.

Richard Todd gives an excellent performance as the insecure man who has repeatedly failed in all his ventures after leaving the army, and Peter Sellers' role is simply vicious. Adam Faith (pop singer turned actor) has a role as a young tearaway and also sings 'When Johnny Comes Marching Home' that plays over the titles, giving a flavour of the promise of riches on leaving the forces and returning home in the 1950s only to find disappointment. Carol White - who seems to appear in almost all these early 1960s 'kitchen sink' films plays Peter Sellers' wife, and watch out for many other well known British actors of the period.

I did try to work out where the location shots were filmed. A CUNningham (Maida Vale) phone number is shown on a wall at one point - IMDB tells me that it's Chichester Road W2, now comprehensively redeveloped, and there's also a shot of a trolley bus in the background at one point outside the pub which has the Barclay's Ales & Stout tiled lettering. This is (or rather was) the Southgate Arms in Hoxton, N1 - Google it to see a photo. These background shots add to the period feel of a world now gone, but not far away.