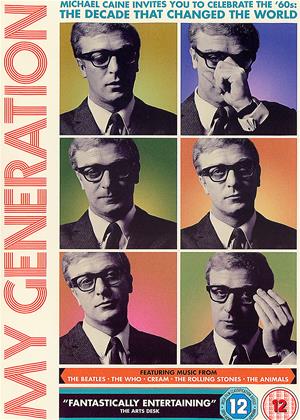 Reviews (3) of My Generation

What a decade ! - My Generation review by JD

in the company of Michael Caine and friends.

and some very funny anecdotes.

What a creative time it was, in fashion, photography , acting and of course music.

Some very nostalgic images of Street life and very funny comments on it all by older members of “ the establishment” !

Enjoyable, entertaining documentary with a great soundtrack - My Generation review by PV

Michael Caine is perfect to present this movie - though as he was born in 1933 I think, he was 30 when the 60s began in earnest! So his youth was in the stale, staid 1950s and he speaks well on that era. Believe it or not, MANY modern things started back then - like sex before marriage and more tolerant views towards homosexuality.

He has interviewed some real big fish like Paul McCartney for this film and other bits of old interviews with others are used too, so we also get the Stones, and especially The Who (real working class London boys).

His description of the 1950s is great - esp from a REAL working class kid like him. Sadly, most Cockneys now live in Essex or southern Spain, it seems, though you may find one or two amongst the Asian communities of East London - the ones who cannot afford to leave perhaps.

Important to remember that teenagers could exist and be freer because of increased wealth and the lack of a war to kill them (the boys anyway); conscription ended in 1960, I think. It didn't end in most other European countries. That was certainly ONE reason for the explosion in pop music in Britain.

My one criticism is this movie is a bit squeamish and coy about addressing issues of immigration and race, and attitudes of native Brits to this. Nothing on ska music or skinheads either.

It's stronger on social class though remember that even in the 60s, many who made it and got famous and had a singing time were posh and rich - as were the managers of most pop groups, and others who were famous. John Lennon and Mick Jagger both grew up in semi-detached suburbia so lower middle class rather than working class.

Sad to say social mobility has gone backwards in recent decades. Maybe because of the abolition of grammar schools, maybe because of sky-high property prices (13 times average income in London!).

I could watch this documentary again right now. A real treat. 5 stars.

very interesting and well put together - My Generation review by OP

Good reflection on the 1960's although limited by its choice of participants and focus upon social class at the expense of other social issues (such as racism) of the time. Overall, though, very engaging and watchable, and really well narrated.