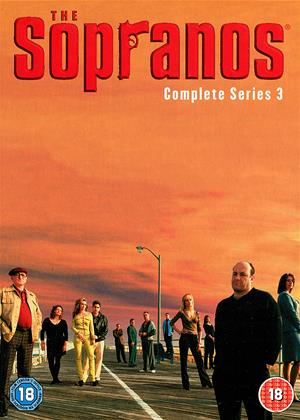 Reviews (1) of The Sopranos: Series 3

When 'The Sopranos' was first shown on TV I only saw a couple of episodes but have been catching up and recently watched both Season 1 and Season 2 - and liked them so much that I've just watched Season 3.

If you're reading this you'll already be familiar with the somewhat bizarre scenario of an Italian-American mobster (Tony Soprano, played by the late James Gandolfini) visiting a psychiatrist to resolve his problems, the focus on Tony's friends / associates and his family rather than crimes and criminal investigation.

It's great TV - but I didn't find this Season as compelling as the first two. The characters have settled well into their roles, but here the emphasis is too much on Tony's family - his daughter Meadow's time at college and boyfriends, son Anthony Junior's troubles at school, his wife Carmela joining in the therapy sessions, Tony's obnoxious sister, Uncle Junior's cancer, and a couple of deaths, notably his mother, in real life the loss of actress Nancy Marchand.

There wasn't enough emphasis on Tony's 'day job' - his mobster activities, crime and violence. Yes, they're all present, but de-emphasised so that at times we lose sight of the fact that frankly, he's not a nice man. And once again, the series ending seemed a bit rushed.

But these are minor quibbles - it really is excellent, compelling TV. 5/5 stars - and yes, I will be watching the further series.