Rent The Tall Blond Man with One Black Shoe (1972) 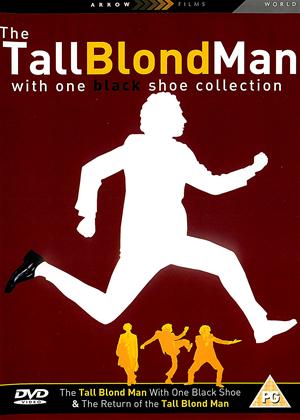 Synopsis:
The Tall Blond Man With One Black Shoe
Bernard Milan covets Louis Toulouse's job - director of a secret service. To get rid of his overly ambitious assistant, Toulouse sends Milan off on a wild goose chase after a dangerous spy who is in fact just an ordinary Joe. So Milan starts shadowing Francois Perrin, an absentminded violinist. This odd game of espionage entraps the three men in a web of hilarious situations as they go from one surprise to the next.

Reviews (3) of The Tall Blond Man with One Black Shoe

FARCICAL AND GOOD FUN AN ENJOYABLE FILM. Some great character sketches, No real surprises, even so I was never bored.

The Awful French Film With One Running Gag. - The Tall Blond Man with One Black Shoe review by NC

I will confess straight off that I do not like slapstick, so I sat through this film with barely a snigger. My wife, on the other hand, has the opposite taste, and laughed her hat off. It's broad comedy, full of smacks in the face, cigarettes down trousers, somersaults off bicycles, gorgeous women falling for buffoons, etc,etc. If you like that sort of thing you'll love it; if not, not.

'The Tall Blond Man' is a lampoon on the familiar espionage story: men in long coats and black cars, a honey trap, suspicions and underhand machinations within the department. Done cleverly, with words rather than pratfalls, it could have been great. I realise it IS great for a lot of people, but I can't see it.

Blier and Rochefort are, of course, excellent. Mireille Darc has little more to do than look stunning, and does it marvellously. Pierre Richard seems to model himself on Hollywood comedians such as Jerry Lewis and Gene Wilder. As I can't bear these people at any price it is not surprising I am less than enthusiastic. Silly faces, and being bested in a fight with bagpipes do not make me fall off the chair.

The disc generously also contains the sequel: 'The Return Of The Blond Man'. I wish it hadn't - then I wouldn't have had the misfortune of seeing it. A tamer story, with lamer jokes, and everybody looking bored. Truly dreadful. Even my wife hardly smiled at this one.

Oh dear, I like French films, even French humour, but this was taking it too far. It all seemed very simple but the bits that were meant to be funny were very lame indeed. Each joke took some lengthy setting up and made it all the more predictable. This film is very dated and we found it quite tedious although we stuck it through to the bitter end.