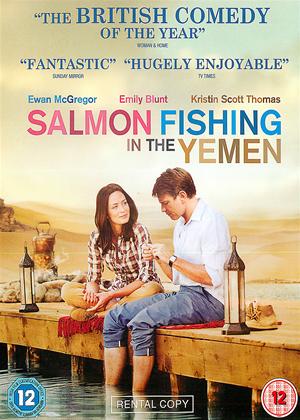 Rent other films like Salmon Fishing in the Yemen

Reviews (7) of Salmon Fishing in the Yemen

Pleasantly surprised - Salmon Fishing in the Yemen review by MP

It's such a nice film! My wife wanted to see it and to be honest I didn't. However withing about 1 minute in was hooked.

Ewan McGregor is wry food indeed and it's the sort of role Emily Blunt excels in.

Being a massive Ewan McGregor fan, this was one of his films which I hadn’t seen but wanted to. The inclusion of Emily Blunt as well as Amr Waked (who had a brief but very effective and powerful role in Syriana) added to this.

Within 5 minutes of starting, this film had me completely engrossed in it. Ewan’s performance, which openly references at one point his character’s Asperger’s/autism, is perfect and he manages to make you at all times feel the emotions his character does. How you slowly see him go from being an utter cynic with limited social skills to someone who openly cheers as his project comes to fruition is a joy to witness.

But special mention must go out to Emily Blunt, whose chemistry with Ewan is as good as Nicole Kidman’s was in Moulin Rouge. Blunt is a fine actress and her positivity at all times against Ewan’s character’s negativity and how she slowly wins him round is worth the price of admission on its own. Their chemistry is one that hopefully will be seen again soon on screen.

Much has been made of Kristen Scott Thomas and her against type role, which again was enjoyable, although she was mainly regulated to shouting down a phone for much of it.

A big mention must go out to Dario Marianelli, whose soundtrack, much like for The Brave One, fits like a glove. Cinematography and direction are also flawless.

The only part which did rankle slightly was the inclusion of a plot device in Blunt’s character arc in the last third which, after the perfectly performed build up, didn’t sit well. The main reason for this was it took the focus away from the partnership of Ewan/Emily, which the whole film perfectly sat round.

But this is a minor complaint about a film which, as the credits rolled, left me with a big smile on my face as well as a sadness that the story had come to an end. Very gentle but highly recommended viewing for pretty much all ages.

Red herring - Salmon Fishing in the Yemen review by Katmac

Persevered with this film for half an hour but switched it off at the utterly ridiculous scene of the Yemeni character fishing by wading  waist-deep in full Yemeni traditional costume through a Scottish river, saying to Ewen Macgregor how wonderful it is that there is no racism among fishermen. Silly and completely unbelievable construct.

British is best - Salmon Fishing in the Yemen review by NC

After seeing so many bish bash bosh films, with special computer effects etc, is quite nice to see little BBC film with actual people walking and talking. Emily Blunt is always worth watching.......ever seen the blonde Sky reporter, in USA mostly of late, Amanda Walker.........has some similarities.....should be in films, wasted at Sky........but maybe too bright for that form of media.....money be better though!

I enjoyed this film and would certainly recommend a viewing, although it wouldn't feature on my list of all time greats.

It is set against the background of present day UK government and Middle East instability, and explores a plot along lines reminiscent of Forrest Gump, with a rather 'gormless' hero, and a similar approach to combining extraordinary events with such realistic filming that strange events become credible, ranging from the Civil Service, investment firms, cultured Arabs owning Scottish castles and lochs and massive investment in salmon fishing facilities in the Yemen. This aspect also develops a slightly subtle humour, a few thoughts on the nature of faith and fishing and some exceptional shots of fish that I really enjoyed (although not a fisherman).

Overall though, the film was let down on the 'romantic' and relationships aspect, with a lack of clarity leaving one wondering about the morality or indeed reason for Fred Jones deserting Mary. The relationships generally lacked any chemistry, and could largely be predicted from the outset.

There are a couple of action scenes in the film and the second one (a flash flood incident) seemed incredible at some points.

I was intrigued by the title - and I was hooked (groan...). Slightly more seriously, I quite enjoyed this film and it certainly made me chuckle in places.

It's a cross between a political satire / romance / mild comedy. Watching it I thought 'this isn't really my kind of film' - so why did I enjoy it? The dialogue is sharp and witty, the acting by Ewan McGregor, Emily Blunt and Kristin Scott Thomas is good, the story bizarre enough to be amusing.

Yes, it could have been sharper in places, Ewan McGregor's character was both fixated and showed limited empathy (but he was described as having Asperger's syndrome), the romantic relationships were all very stilted, the Kristin Scott Thomas character should have been much nastier, the Sheikh Muhammed character was a bit of a caricature, the assassination plot etc was a distraction, and the 'green screen' effects at the end somewhat unrealistic. It's a gentle film, so perhaps extra 'sharpness' isn't required and anyway, these are minor criticisms. Perhaps a more serious criticism is that it tries just a little too hard to be both 'quirky' and 'British' - but I still enjoyed it.

This was a nice story - lots of amusing politics and the title is a challenge for anyone to make a good story out of!!

A rather disappointing romantic comedy Salmon Fishing in the Yemen has plenty in it’s arsenal to make a catchy little British comedy with a little heart warming romance at it’s core. What is delivered instead is a predictable and rather touchy-feely romance with a bizarre and frankly poorly explored premise.

Based on the best selling novel by Paul Torday, Salmon Fishing in the Yemen tells the story of Sheikh Muhammad (Asr Waked) an incredibly rich man with a love of fly fishing who employs a British fisheries expert, Alfred Jones (Ewan McGregor), to help him build a suitable lake for the sport in the middle of the desert. To accomplish this he also requires a little help from the British government, in the form of the Prime Minster’s PA, Patricia Maxwell, the one likeable character played by Kristen Scott Thomas.

The romantic element comes from the problematic relationship that develops between Jones and the Sheikh’s financial assistant Harriet Chetwode-Talbot (Emily Blunt), whose job it is to convince Alfred to get on board with the Sheikh’s plans. Her methods of doing so are a little unorthodox – although at first the pair do make vague attempts at not falling for each other – but end in an utterly unsurprising fashion.

The cast list for the movie comes as quite a shock considering the tawdry nature of the final piece, but one imagines that on paper this looked like a diamond in the rough; perhaps in the hands of someone such as Richard Curtis a better balance might have been struck, the movie was directed instead by the Swede Lasse Hallstrom who has turned the movie into passably charming romance.

One can’t help but feel as though the full potential of this movie has gone unexplored, the comedy elements almost entirely forgotten and the final outcome somewhat of a disappointment.