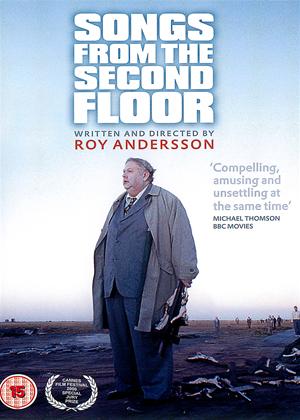 Rent other films like Songs from the Second Floor

Reviews (3) of Songs from the Second Floor

Wow wierd - Songs from the Second Floor review by JD

The Swedes really can do far out humour. This is so strange that you have to get in the mood before it starts. Some of the rise and fall of reginald perrin approaches it but no British comedy has matched it. As an example there is a traffic jam through which winds a protest rally of students whipping themselves. They are only ever however in the background, it takes most of the film to realise what they are doing. Some of the humour is done so dead pan that you need to adjust the contrast setting. Not for mainstream audiences but highly recommended for a more experimental enthusiast.

This film is not only confusing. It is also deeply unfunny. Really.

I saw the first film in this trilogy and that was pretty good.

This, however, looks like something to emerge from some pretentious drama school workshop.

Not one single laugh in the whole thing.

And yes, I do appreciate oddball and dead pan and off-beat humour. But this is not humour, It's just dull. An utter yawn-fest.

To say the British don't do humour 'as well as this' is utterly absurd. Even the most unfunny 'diverse, female' tedious BBC comedienne can create more laughs than this pretentious load of drivel.

No stars. Stick to making meatballs, Sweden, if this is the best you can do for comedy.

Probably the funniest film you will ever see without actually laughing. Is this even supposed to be a comedy? Terry Gilliam’s Brazil is frequently evoked in reviews of Roy Andersson’s films but I think the work of Chris Morris is more apposite. Like “Blue Jam”, but with the jokes taken out, its only really funny afterwards when the immediate unease at what you are watching has safely passed.

The film is comprises a series of linked vignettes in which the pallid occupants of an imagined Scandinavian city find themselves in the grip of a millennial crisis. The gridlocked streets are full of self flagellating office workers whilst church and state have united to try child sacrifice as their solution to the problem. Ghosts from the main protagonist’s past have come back to haunt him and to make matters worse so have unknown ghosts from the past of other people.

Much in the manner of Jaques Tati’s “Playtime” every scene is meticulously staged in the studio to create an alternative reality but here it is a doomed alternative Sweden which all the tasteful bentwood furniture in the world is not going to save.

I can’t think of any other genuine work of art to emerge from all the hullaballoo around the end of the last millennium and I can’t believe I have only found it 20 years later. This film deserves much wider acclaim.

To sum up: 3 in anticipation (I had previously seen Andersson’s “A pigeon sat on a branch reflecting on existence” which left me bemused and not exactly crying out for more) 4 for enjoyment and 5 in retrospect (this time I “go it” and learned to embrace the darkness) Unremitting gloom with frequent patches of despair - Book Early.