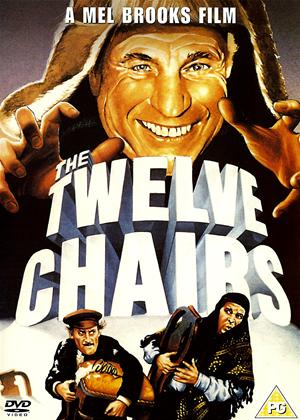 Synopsis:
Although the plot of 'The Twelve Chairs' is wild enough to have been created by Mel Brooks, it's actually based on a Russian story written by two Soviet journalists, Ilya Ilf and Yevgenni Petrov, in the 1920s. Set in Russia in 1927, this much-loved, hilarious Mel Brooks comedy classic is the tale of a former aristocrat who is now a Russian clerk under the new Soviet regime. When he learns that his dying mother-in-law sewed a fortune of family jewels into one of the twelve dining room chairs, he sets off across Russia to find it - with an opportunist, a priest and his former servant all in equal pursuit
Actors:
Mel Brooks, Ron Moody, Frank Langella, Dom DeLuise, Andréas Voutsinas, Diana Coupland, David Lander, Vlada Petric, Elaine Garreau, Robert Bernal, Will Stampe, Bridget Brice, Nicholas Smith, Rada Djuricin, Branka Veselinovic, Mladen 'Mladja' Veselinovic, Petar Banicevic, Dejan Cavic, Ljubomir Cipranic, Radmilo Curcic
Directors:
Mel Brooks
Writers:
Ilya Ilf, Yevgeni Petrov
Aka:
The 12 Chairs
Studio:
20th Century Fox
Genres:
Classics, Comedy

Reviews (1) of The Twelve Chairs

This film has a 92% positive rating on Rotten Tomatoes??? Someone has blundered! Like the notorious "Gonks Go Beat", it starts with a song implying that the whole thing is going to be lots of fun, but from the moment the opening credits end it's downhill all the way. Mel Brooks is an extraordinarily hit-or-miss director, and this is, apart from one or two of the final films he made before admitting he'd completely lost the ability to be funny, his biggest miss.

Brooks' direction is so lackadaisical that at times I wondered if there was a director present at all. Inexplicably, some characters have heavy Russian accents while others don't. Since they're all supposed to be speaking their own language, none of them should really sound "foreign", but it seems to have been left entirely up to the individual actors whether they did or not. Frank Langella, whose sinister good looks resulted in his being typecast as charismatic baddies, including Count Dracula, would have been perfectly cast as the amoral antihero, except that his performance belongs in a very different and far better film. Unfortunately almost all his scenes pair him with Ron Moody, whose over-the-top performance lurches from children's TV wackiness to hammy pathos without ever being remotely believable. It doesn't help that Moody adopts a very thick accent while Langella has none at all, even though they're both supposed to be Russians speaking Russian.

This lazy, schizoid quality is present throughout, and the overacting gets so out of hand that one minor character, a screamingly gay theatre manager who is meant to come across as outrageously camp, seems quite underplayed compared with most of the "normal" people. Dom DeLuise, as the not terribly devout priest whose rival quest for the treasure is even more farcical than that of the two main characters, is particularly horrendous, and mostly doesn't seem to be acting at all, just being a loud, annoying idiot, when he isn't getting into speeded-up chases and fights so reminiscent of Benny Hill that you expect "Yackety Sax" to start playing while scantily-clad women scurry about for no reason at all. Sadly, this doesn't happen. As for Mel Brooks, his performance is just as bad if not worse, but fortunately he isn't in the movie for long enough to become absolutely unbearable.

Exactly what Brooks was thinking of when he tried to add childish slapstick straight out of "Crackerjack!" to the plot of a darkly satirical novel satirising the failure of the post-revolutionary soviet regime to deal with basic human selfishness and greed will never be known, and your guess is as good as mine, but the end result is a desperately unfunny failure that tries to go full tilt in two directions at once and ends up flopping around like a stranded halibut. By the way, if you're familiar with the novel and you're wondering how a story which ends so grimly could possibly contain all the juvenile foolishness I've just described, of course it couldn't, so Brooks greatly watered down the ending, thus removing any point the film might have had.