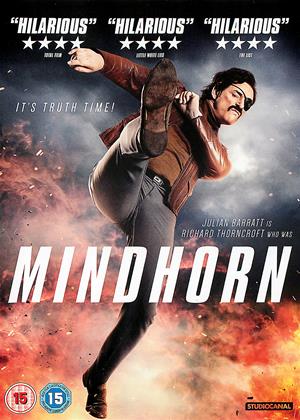 Mindless, and not much of the other thing either... - Mindhorn review by Count Otto Black

Although I never found the self-consciously weird and wacky "The Mighty Boosh" as funny as it was cracked up to be, and what I've seen of other projects masterminded by the same team hasn't impressed me much either, this film involves many talented people and its basic premise sounded pretty good, so I thought it might be a lot of fun. I was wrong.

That basic premise of a washed-up actor getting into a ghastly predicament because a crazed killer thinks the character he plays is real is the only idea they've got, and the peculiarly ham-fisted way they use it simply doesn't stretch to anywhere near an hour and a half. The writers obviously know this, because early on the main plot very suddenly and clumsily stops, is completely forgotten about for ages while the story shifts to the hero's extremely clichéd attempts to rekindle an old romance, during which most of what humour there is derives from a Dutch supporting character's difficulty with the English language, and then abruptly kicks in again much later on. And oddly, although the writers seem to take it for granted that the concept of a cheesy eighties detective with a daft name who is basically a cross between the Six Million Dollar Man and Bergerac is so intrinsically hilarious that it can carry the film all by itself, Julian Barratt spends a great deal more screen-time playing Richard Thorncroft, a cross between David Brent and Alan Partridge who isn't anywhere near as funny as either, than he does playing Thorncroft in character as Mindhorn.

The script is just plain awful, with a slapdash approach to pace, character, and pretty much everything that borders on randomness. Veering wildly between grim black humour and zany slapstick, the plot is less a narrative than a series of barely connected situations that happen to involve the same people. Many of the jokes are older than God. The police are morons too useless to catch a suspected murderer who literally has a mental age of nine without the help of a fictional character, not because this is funny, but because making them even more stupid and inept than Thorncroft/Mindhorn is the only excuse the writers can think of to justify him being involved at all. Steve Coogan in a minor supporting rôle effortlessly reminds us he's a much better actor than anyone who's in this movie for longer than him. And if you're wondering what Kenneth Branagh has to do with any of this, it's a classic example of hiring a really famous actor for one day so you can put his name on the poster. Bela Lugosi's in "Plan 9 From Outer Space" for longer than Branagh's in "Mindhorn"!

If references to the Isle of Man (which offers very generous tax incentives to films shot there, including this one) were in themselves funny, this would be the funniest film ever. Unfortunately it's not, though it might be the Isle-of-Man-est film ever, so I'd recommend it to anyone trying to make up their mind whether or not to book a holiday there. But as a comedy, not so much. The only moment that genuinely grabbed my attention was a closing credit I had to rewind in case I was seeing things, but no, it really did say: "Executive Producer: Ridley Scott". The story of how they persuaded someone like him to have his name associated with something like this would probably be a much funnier movie than the one they actually made.

Improves as it goes along - Mindhorn review by RW

Like others I was not impressed with this film at first, it appeared unoriginal and cliched and which I was most surprised considering the talent in it. However as it went along I warmed to it, the plot didn't go where I expected it and the characters developed in way I hadn't predicted. It's not a classic by any means but I recommend you watch the full film before forming an opinion.

Hard to imagine why actors of the calibre of Kenneth Branagh and Simon Callow would want to associate themselves with this appalling, juvenile and singularly unfunny film. We gave up on it after 30 minutes, and that was too long. Don't bother!

not too bad - Mindhorn review by DC

Yes, it was OK. Some funny bits definitely. Totally unoriginal and in parts a rerun of Alan Partridge Papa Alpha ( another one of Coogan's 'Baby Cow' productions). In fact the main character is a Partridge trope really but there's still scope to have some fun with this type of delusional character. Not sure it will do much for Isle of Man tourism mind. Wouldn't have dashed to the cinema to see it but worth a rental if you like Partridge/David Brent style of humour.

I can't say that I was a huge fan of 'The Mighty Boosh' but I do quite like Julian Barratt's understated humour and was a bit surprised by this film's low ratings and carping reviews. My wife and I both enjoyed it and she is normally quite critical of the films that I choose. Sure this is no 'Citizen Kane', it's a typical British comedy film, a bit old-fashioned and as others have said it's a bit like Steve Coogan's 'Alpha Papa' or a big screen version of 'Toast of London', with Barratt's down on his luck actor Richard Thorncroft very much like Matt Berry's down on his luck actor Steven Toast.

The 'plot' such as it is, is just a vehicle for few jokey set pieces and a quick romp around the Isle of Man's tourist attractions such as the Laxey Wheel but overall it's an enjoyable film with a good performance by Barratt and by some of the actors doing cameos - Kenneth Branagh, Steve Coogan and Simon Callow - although the normally excellent Andrea Riseborough seemed somewhat miscast.

Blimey, this is weak. The presence of some established comedy performers occasionally kicks this sluggish Britcom into life but, really, there's very little to commend here. A plot that meanders and ultimately takes you nowhere, a lead character as uncompelling as they come and a film that looks like it cost thruppence to make. If only they'd spent tuppence more on the script, so devoid is it of anything remotely amusing. Avoid and spend your valuable time on something funnier, like grouting the shower.

In the grand tradition of British film comedy, this is more TV fare than cinema fare. Julian Barratt is a likeable lead as an ageing Hoff-type actor who was once the star of a popular detective series and still thinks he has what it takes. There are some humorous situations but the TV vibe keeps dragging it down. Verbal comedy on the big screen requires more direction than plonking a camera down in front of a performance. Nevertheless, this is better than most Britcoms. After a bland first half, some much-needed action adds zest to proceedings and the film becomes unexpectedly watchable.

Well I thought it was funny. - Mindhorn review by AL

I am not a huge fan of comedy. I can sit stony faced through all sorts of 'classic' comedies, but not this. I liked the reference to the unfeasible 80s plots and unbelievable characters, and wondered why no one has sent up this genre in the past (that I know of). Maybe it's one of those 'you had to be there to get it' type things.

Fun, reminded me of the 1980s 'Comic Strip Presents' series, which I enjoyed back in the day. The idea of the Isle of Man based super sleuth/action hero is the sort of slightly surreal thing they could have come up with.

This was a blast - didn't watch it for ages due to lukewarm reviews but it is consistently funny, it used its Manx location really well and the talent involved have great fun sending up themselves and the quite specific genre of British 80s detective shows featuring alpha male leads.

If you know and love Garth Marenghi's Dark Place then this covers some of the same ground but is definitely still worth a watch.

Some laughs amusing in parts, but felt like a poor man's Hot Shots. For a full that didn't last that long, it sure felt that it did.