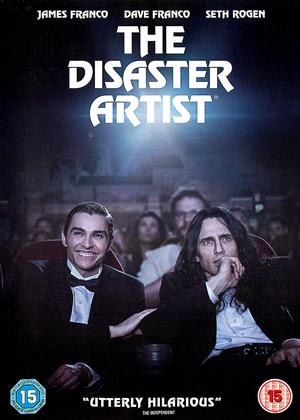 Reviews (4) of The Disaster Artist

Slow to engage, but.... - The Disaster Artist review by JW

15 minutes in to this and I was thinking of turning it off, but I'm glad I didn't. Tommy Wiseau is a truly weird guy. James Franco's accent almost needs subtitles and you can't believe someone actually talks like this - but it's hilarious when you watch the extra article after the movie and see the real TW with James Franco and realise he really does talk like this.

The movie does (eventually) engage and entertain, and I'm very glad I persevered. The Room is the strangest movie and would never have been made without Wiseau's cash (wherever that came from!), and this seems pretty true to how it all happened (if you compare it to the Wikipedia page).

Possibly a film for cineastes but I do recommend it

So bad it’s great - The Disaster Artist review by JD

I really enjoyed this movie. An amazing true story about the making of The Room, famous for being the “ worst movie ever”.

Superb acting ( James Franco steals the show) , and the movie has a real heart with a tale of friendship based on no natural talent !

Great to see the extras too, as we meet the real characters as well as showing scenes from the original movie, alongside the new version.

Amazing movie and the fact that it's based on truth makes it even more so. Would love to know where Tommys money came from. But shows you that money can buy anything.

I see what they were going for...but not good. - The Disaster Artist review by EP

This film is a story telling of the making of another film called The Room which became famous because it was so bad. This film is similar in my view, i.e. bad. I see what they were going for - a tongue in cheek perspective black comedy on what has become a cult film but I didn't finish watching this and unless you're a fan of The Room I would say watch something else, like I ultimately did.

Tommy Wiseau is a man whose appeal moves at the speed of light. With one film in a short amount of time, he became the modern day Ed Wood with the modern day The Rocky Horror Picture Show. Wiseau’s ridiculously earnest direction and laughably-bad acting made him a notable name in terrible films but the unintentional hilarity of his failed drama The Room has made in the subject of midnight screenings. And he didn’t even have to die for him to receive a biopic that is one of the best films of the year.

The story of how this strange director came to make such a remarkable film is told entirely from the perspective of Greg (Dave Franco). He’s an amateur actor that can barely remember lines and has little confidence himself. But into his class walks the mysterious Tommy Wiseau (James Franco), with his long hair, pale face and European accent. Tommy isn’t a good actor either but a fearless one; he thinks nothing of hopping on the stage to scream his lungs out and climb the scenery. Greg wants that spark and drive of not being afraid of your dreams.

Tommy agrees to help Greg with his acting path but on certain terms. He can’t ask about Tommy’s past, his age or where his money comes from. That’s not a problem for Greg considering how much he’s willing to look the other way for his dreams to come true. Tommy has such financial freedom that he can afford an apartment in Los Angeles where the two of them can pursue their acting careers. His wealth is so massive that when they can’t find a single solid acting gig, they decide to make their own movie. And so begins the making of The Room, a film written and directed Tommy with him playing the lead role.

The tactics of Tommy are baffling to everyone from the first day of production. The first scene is shot inside a studio that is built to look like an alleyway, even though there’s a perfect-for-filming alley right outside. He knows little of the mechanics of filmmaking, from the renting of equipment to the treatment of his actors. You laugh at his ineptitude but also cringe at his ego. He hires an extra cameraman to film behind the scenes and will use it later to incriminate his crew. He reworks scenes so that their tone changes completely, as when Tommy laughs at what is supposed to be a sad story in the script. He even stoops to the level of critiquing the looks of the actress he is to have a sex scene with, which he performs horribly.

A film such as this would be easy to punch downward at a figure such as Tommy. Despite some added scenes of the writer/director/actor being terrible at football and remembering lines, the film ultimately portrays him as an almost pitiful person. Greg pulls Tommy aside to inform him that he’s being a jerk to cast and crew. Tommy brushes off such talk, trusting in his strategies that he believes are the correct path. After all, Alfred Hitchcock would throw real birds at his actors for real results. Tommy figures he might get that same realism from refusing his cast and crew any water or air conditioning. He learned everything he knows about moviemaking from watching movies, including his most ridiculous lines that were inspired by James Dean. This makes him a rather perplexing figure in that he studied all the passion of filmmaking without any of the essential mechanics. Any errors or changes are explained away with the same glint of movie magic that Ed Wood once bragged about.

The big difference between Wiseau and Wood is that Wood had plenty of weird friends to share his weird vision. Hardly anyone is with Tommy in his movie production. Even Greg, who continues to support his friend and co-star, finds himself regretting his trust in Tommy as the shooting proceeds long past its expected date of completion. And even as Tommy continues to push forward, there’s an almost pitiful nature to his desperation and jealousy to have Greg as a friend.

All of this makes The Disaster Artist sound like an emotionally moving drama but it’s really one of the funniest film of 2017. James and Dave Franco give this material an ease of comedy where they don’t have to overdue the humor. Wiseau is a funny enough guy from his personality and voice, unable to read sarcasm and references with an almost cute innocence. And though we laugh at his failure of a movie that succeeded more as an unintentional comedy than a gripping drama, you don’t feel guilty because he embraced the hilarity and cult status that followed. We can look back and laugh at The Room as much as he can and appreciate that something he made brought joy to so many. As Greg points out to Tommy when the premiere audience howls with delight, “Hitchcock never did that.” That director might have had the dignified smirk-inducing “Good Evening,” but he’ll never make anyone burst a gut with “Oh hai, Mark.”