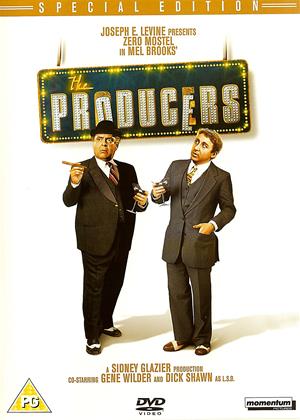 Synopsis:
Max Bialystock (Zero Mostel) is a washed up Broadway producer forced to romance old ladies to finance his plays. When timid accountant Leo Bloom (Gene Wilder) is brought in to do his books, he inadvertently reveals to Bialystock that under the right circumstances, a producer could make more money with a flop than a hit. Bialystock cajoles Bloom into helping him achieve this end and together they come up with what they consider to be a sure-fire disaster waiting to happen - a musical version of Adolf and Eva's love story entitled 'Springtime for Hitler'. But is it possible that they might actually have the most unlikely hit of all time on their hands?
Actors:
Zero Mostel, Gene Wilder, Estelle Winwood, Renée Taylor, David Patch, William Hickey, Barney Martin, Shimen Ruskin, Frank Campanella, Josip Elic, Madelyn Cates, John Zoller, Brutus Peck, Anne Ives, Amelie Barleon, Lisa Kirk, Nell Harrison, Mary Love, Christopher Hewett, Andréas Voutsinas
Directors:
Mel Brooks
Producers:
Sidney Glazier
Voiced By:
Mel Brooks
Writers:
Mel Brooks
Studio:
Momentum
Genres:
Classics, Comedy, Music & Musicals
Awards:

Reviews (6) of The Producers

A satirical masterpiece. Amazing stuff! - The Producers review by RP

In today's politically correct society it makes a refreshing change to watch again a film so brim full of scathing satire, so deliberately and outrageously offensive - and so side splittingly funny - as this. Whenever I watch it, it never ceases to amaze me.

By now you'll know the plot - pair of dodgy theatrical producers plan scam to raise lots of money for a play so bad that it will immediately fail, upon which the producers keep the cash. But things go disastrously wrong...

And the reason they go wrong is that a musical so offensive as 'Springtime for Hitler' with jackbooted, goose-stepping chorus girls and lines like 'Don't be stupid, be a smarty. Come and join the Nazi party' is so outrageous and yet as funny today as it was for the audience within the film. This is a film that pokes fun at so very many segments of society, at so many socially unacceptable practices, and even at today's 'politically correct' attitudes - although the film was made almost 50 years ago.

Written and directed by Mel Brooks, it won an Oscar for Best Original Screenplay. Watch this for the first time and feel your jaw drop. Watch it again and rejoice in this satirical masterpiece. Superb stuff - 5/5 stars.

Awfull - The Producers review by KL

A great deal of noise and shouting which would appeal perhaps to a five year old mongoose with hearing problems. Grown up adults should be offended by this movie.

If you're the sort of person who think dire modern Hollywood comedies with swearing and bodily function obsessions are funny, you probably won't like this.

If, however, you enjoy sharp satire and are bright enough to notice intelligent irony, then you'll love this film. The humour is Jewish, and also pitch dark for those who get the references. No wonder it was successfully revived recently.

True, it is a bit dated in patches - and those easily offended by dolly bird gags should probably cover their eyes.

But really, this is one of the best musical movies ever made - a classic. Mel Brooks at the top of his form.

A Romp - The Producers review by OM

A rompant farce, disrespectful to everything it touches. Huge fun. Great acting by Zero Mostel, Gene Wilder and particularly by a scuttle-helmeted Kenneth Mars as Hitler's last remaining fan.

Splendid in concept and execution. It should be compulsory viewing for all who take themselves too seriously. With luck they would suffer terminal meltdown.

worth watching again! - The Producers review by GS

If you have already seen t his,it is worth getting the one from here ,it is the 50th Anniversary Edition,and the video and audio has been all updated,and has been stunningly restored in 4K. It has a load on extras too.The movie won an Oscar and Gene Wilder is superb.

Worth getting for sure

Too crazed - The Producers review by LD

Had to switch off after 35mins cos it felt a bit too much like watching a lunatic asylum. I realise that's in many ways the point, but was just a bit too hyper for me