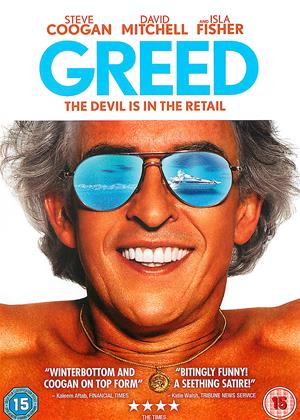 I wasnt sure what to make of this film to begin with. However the style won me over and I liked the way the characters are quite unlikeable but has enough humour to entertain.

That being said I felt like this would of worked better as a mini series where we have more time with the characters.

At times it reminded me of Austin Powers with the relationship between steve coogan and his son.

The lion scene was random but would of worked better if there was more build up around it.

Overall it was good but not great.

Entertaining on a low level - Greed review by AC

Obviously about the repugnant Philip Green. It was just a rather empty film. Really enjoy Steve Coogan - so nothing to do with him - just didn't enjoy it! And the CG lion at the end was really unconvincing. Can't give it more than 2 stars.

I think after so many series/films of Michael Winterbottom’s The Trip that the director is best suited mostly meandering comedies that try to evoke the most humor from mere rambling conversations. That’s all well and good for a buddy travel comedy that has lasted for so long but those films don’t exactly offer up the most insightful of themes. It’s for this reason why Greed is a bit of a misstep, taking aim at a very important issue while staggering around it with Winterbottom’s trademark direction struggling to evoke a laugh in its dark satire.

Steve Coogan is front and center which I’m sure isn’t a surprise as the biggest gun in Winterbottom’s arsenal. He plays Sir Richard McCreadie, the wealthy owner of a textile organization he built from the ground up. His birthday is coming up and he’s hoping to celebrate it on the Greek island of Mykonos. For the event, no expense has been spared, including a Greek-inspired them with a stadium battle against a lion. For a special tribute, journalist Nick (David Mitchell) is tasked with trying to assemble a retrospective video for Richard. What starts as a cobbling of interviews and recorded footage for a video soon turns into a revealing portrait of a corrupt figure playing his part in the grand scheme of capitalism.

The curtain pulls back and reveals that Richard has been a scammer for most of his life. His early days in boarding school found him playing three-card monty and trying to rip-off others as he haggles and barters. When he soon starts up a fashion business, he tries to hardball his manufacturers into getting the cheapest price. Somehow he finds away. And he keeps cutting corners as best he can, legal or illegal as they may be. Richard is called into court at one point to answer for his unsound business practices which he cleverly diverts with whataboutisms by shifting the conversation to “hey, them Amazon folks are pretty corrupt, right?” Not much of his business decisions, elaborate as they may be, are illegal. They’re complex, sure, but as Nick soon learns in the many interviews with Nick’s former associates, most of Richard’s monopoly thrives on illegality.

This aspect is at its darkest when Nick takes a trip to the Asian sweatshops to take a look at the work conditions. They’re horrible. Workers are in cramped conditions which, as we learn in flashbacks, has resulted in deaths due to fires. Those who work there barely make a living and live off very little. It’s a horrifying look at how the world of fashion functions, something Richard’s current wife of Samantha (Isla Fisher) is all too familiar with. She hasn’t forgotten her work in the sweatshops that was a nightmare she can’t go back to but realizes it is something she can’t escape from.

Richard’s party also becomes a hot-bed of contention when the beach of his island are crowded with refugees. Naturally, Richard is hostile and bitter towards them. He believes his solution to this situation is to employ the refugees to work at his party for free. Someone informs him that’s slavery. No problem, he figures; just give them minimum wage. It’s far more than they deserve, he reasons. And the party only grows more enraging from there as the decadent mounts and the sneering at the pour grows fouler. It’s out of all this dark satire that it’s only natural someone is going to fight back when the party goes awry.

Greed has some intriguing aspects in its wavering juxtaposition of the baffling nature of the rich and the horrible conditions of the poor. But per the formula of Winterbottom, the film merely takes mild note of the issue while dancing around Coogan’s rambling comedy and the mockumentary style of Nick’s investigation. What we’re left with is a film that takes note of the eat-the-rich message but doesn’t do much with it, resolving its issues with an on-the-nose allegory, fine performances and a text epilogue to let you know how terrible the world still is with this system of corporate greed trumping humanity. And that unorthodox assembly leaves a little more to be desired from a film that doesn’t pack as many teeth as it should, choosing only to nibble on the tragedy of late-stage capitalism rather than take a bite out of it.