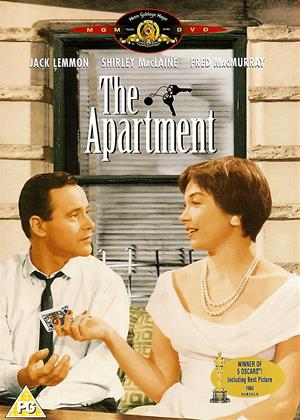 Reviews (8) of The Apartment

Comic genius and a moral tale - The Apartment review by HE

Quite a daring plot for the early 1960s I thought. Jack Lemmon's acting was marvellous. The dark side of morals and behaviour of the time explored, especially the role of women in the home and the work place. Not the impact of Some Like it Hot but still very watchable.

A classic for good reason - The Apartment review by ND

Just wonderful. The study of office politics is worth watching and the portrayal of a lack of morals in a moralistic age is not as hard hitting as it would have been at the time but still a bit shocking.

Classic - The Apartment review by LP

Fantastic script,acting and pacing,jack lemmon brilliant and so too Shirley mclain.

Really enjoyed this,great final scene too,up there with some like it hot in my opinion.

Wilder's bleakest comedy is a very modern story of urban loneliness and corporate bullying which features a particularly desolate suicide. At times the plot devices make it seem like watching an adaptation of a Russian novel. It's one of the most beautiful looking comedies ever made with its gorgeous, gleaming widescreen black and white cinematography, and superb set designs.

It has wit, but this is very pessimistic. Indeed, at times it only appears like comedy at all because of the extraordinary performances of Jack Lemmon and Shirley MacLaine, the two great comedy actors of their time, whose charm manages to lighten the film's bitter themes, and obscure their own characters' deep flaws.

Lemmon is the go-ahead corporate wannabe CC Baxter seeking to jump the executive ladder by permitting his bosses to use his apartment to have sex with their female employees without their wives knowing. He also aspires after Fran Kobelik (MacLaine), a lift operator sexually exploited by the man at the top, Mr. Sheldrake (a rather sinister Fred MacMurray).

Even the relief from this mournful triangle is heartbreaking, an encounter that an inebriated Baxter has on Christmas Eve with a lonely, ditzy barfly cruising for a one night stand (marvellously played by Hope Holiday). It's a powerful, film of overwhelming sadness and a sexual frankness unusual for its time. Without the constant barely audible note of comedy, the film would be too painful to bear.

A great, classic Hollywood romcom that was very risqué at the time it was made delving, at times with a quite serious tone, into the nature of marriage and infidelity. Ultimately though it's a delightful love story. Jack Lemmon plays C.C. Baxter, a somewhat hapless insurance office worker who dreams of promotion but lacks the drive and ability to get it. However he attempts to ingratiate himself with various of the bosses by hiring out his apartment for their adulterous affairs. Managing the demands of his 'customers' is almost a full time job. When the top boss, Mr Sheldrake (Fred MacMurray) wants to use the apartment C.C. thinks he'll now be in for that longed for advancement but he's in for a shock when he discovers Sheldrake is having an affair with Fran (Shirley MacLaine), the girl C.C. secretly loves. The film attacks the casual misogyny and attitudes of the men towards women, sex and the their reliance on the power of money and uses some dark turns of the story including attempted suicide, the exploration of vulnerability and emotional blackmail to expose these issues. But actually the film is a delight with Lemmon and MacLaine a sweet couple who, of course, find each other at the end. Fans of films like this will recognise where some aspects have been homaged in later romcoms (e.g. When Harry Met Sally - 1989, Sleepless in Seattle - 1993). This is a much respected film and one that is worth checking out if you've never seen it. The serious themes here are cleverly wrapped in a light comedy film making it quite a surprise when you see what it's trying to say about American society.

Sorry about the cliched Title. It's true though. Jack Lemmons performance is outstanding how about this for a line

"I used to live like Robinson and Crusoe, shipwrecked among 8 million people but one day I saw a footprint in the sand and there you were"

Doesn't get quite the required reaction from Shirley MacLaine's character who seems to be a bit of a dullard hence 4 stars.

Is it easier to do photography in black and white? It looks so clear and tonal. The plot however is unenchanting (multiple affairs) and the acting is wooden. Too dated for me.

A dated film. - The Apartment review by George

We enjoyed this film when it was first released, but now it feels very dated and boring. We didn't bother to watch it all.